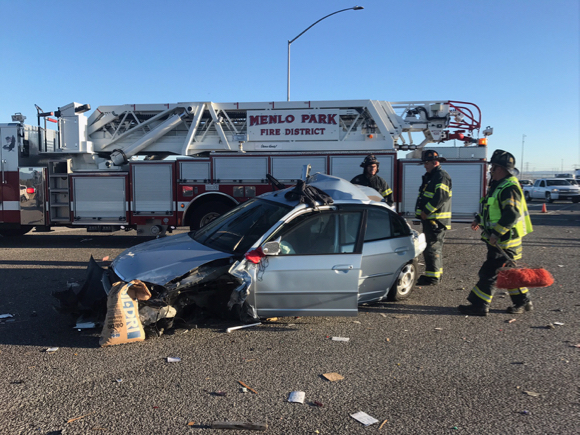 Menlo Park firefighters responded to a four-vehicle accident at Bayfront Expressway and University Avenue at 7:50 this morning that resulted in one person being transported to Stanford Hospital. West bound Bayfront at University was shut down while law enforcement conducted an investigation and documented the scene. 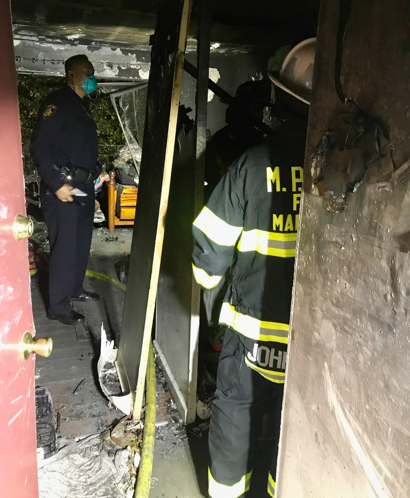 The accident happened just a little over 12 hours after Menlo firefighters responded to a fire at a three- story, 22-unit apartment complex in the unincorporated area of North Fair Oaks Friday afternoon.

The fire, smoke and water used to extinguish the blaze essentially destroyed almost everything in the 1000-square foot unit that had been on fire, damaged three units, and displaced 10 residents.

Fire Marshal Jon Johnston determined that the cause of the fire was related to a malfunctioning freezer located in the kitchen; damage to the structure was in excess of $200k with the contents loss of at least at $50k.

“The fire was blowing out of a second floor window in the front of the building when we got there, and there were reports of people trapped somewhere inside the complex,” said Battalion Chief Tom Calvert. “I put two crews on fire attack and others above the fire on the third floor to find anyone trapped. We quickly checked all 22 units and determined that everyone had gotten out safely. About that time they radioed me that the fire was under control, so it all went our way today, which doesn’t always happen.”