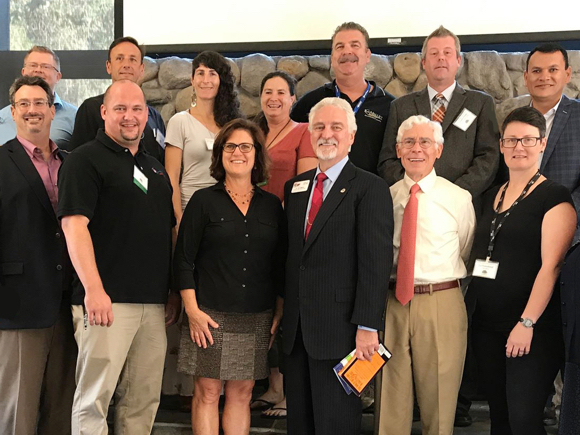 Dr. Misner, known as the “father of modern networking” by CNN and a New York Times bestselling author, talked about the three stages of growth for BNI groups. “Chapters are either ‘On Fire’, ‘On Hold’ or ‘In A Hole’. Bringing diversity in terms of the size of companies and levels of experience is key to growth,” he said. “The Constant Growth group is at a level most groups aspire to, on its way to ‘On Fire’ having already exchanged well over $5 million in business between members this year.”

“We are on track to exceed $6 million in closed business this year,” said incoming President Charlie Porter (back row, second from right), Menlo Park Farmers Insurance Agent. “However, we want to keep growing. We want our members to grow as well, and that’s why Dr. Misner’s visit and advice is so timely for us.”

What an experience! realising the dream and with a Chapter approaching “On Fire” your Members really understand “GIVERS GAIN’. I wish you all the best of endeavours for the future.