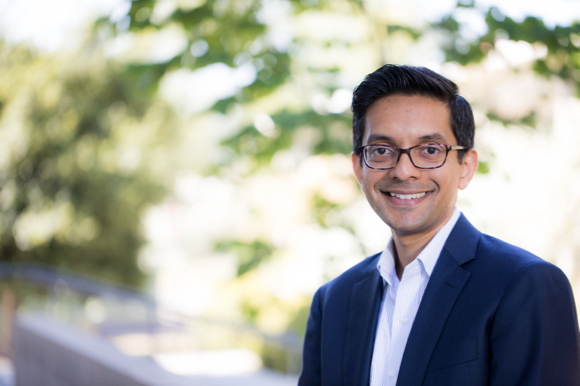 Viewing the Beginning of Time from the Most Remote Places on Earth is the title of lecture being given by SLAC/KIPAC scientist Zeeshan Ahmed (pictured) on Tuesday, October 3, 2017 at 7:30 pm. The free lecture will be held at the Panofsky Auditorium (the Science and User Support Building) on the SLAC campus. Registration is not required.

Shortly after the birth of the universe, space was filled by a plasma that was literally red-hot. The light radiated by that plasma has traveled the vast emptiness of space for billions of years, with the expansion of the universe slowly stretching its waves until today it appears as microwave radiation.

This is the Cosmic Microwave Background (CMB), a glow still visible in the night sky. This glow is almost uniform, but small variations from point to point hold information about the conditions of the universe 13.8 billion years ago.

This lecture will introduce the CMB, present the sophisticated cameras we build to observe it, and describe the remote outposts of our planet where we deploy these cameras to take pictures of this faint radiation. As we image the CMB in finer and finer detail, we hope to improve our understanding of the beginning of the universe and perhaps of time itself.

Zeeshan Ahmed is an observational cosmologist at the Kavli Institute for Particle Astrophysics and Cosmology and SLAC National Accelerator Laboratory. He received his PhD from Caltech in 2012 and held a postdoctoral position at Stanford University before being appointed a Panofsky Fellow at SLAC in 2015. This year, Ahmed was a recipient of the U.S. Department of Energy’s prestigious Early Career Award.

This is going to be epic