Shalini Bitzer continues a textile business that her grandfather started

Shalini Bitzer unlocks the door of a rather nondescript building at the back of the Allied Arts Guild. Nothing indicates the beauty that lies behind — a cornucopia of textiles in a variety of colors, patterns and textures that Shalini sells at her India Silk studio.

Her business is mostly retail and often with interior decorators, although the savvy consumer is welcome as well — all by appointment. 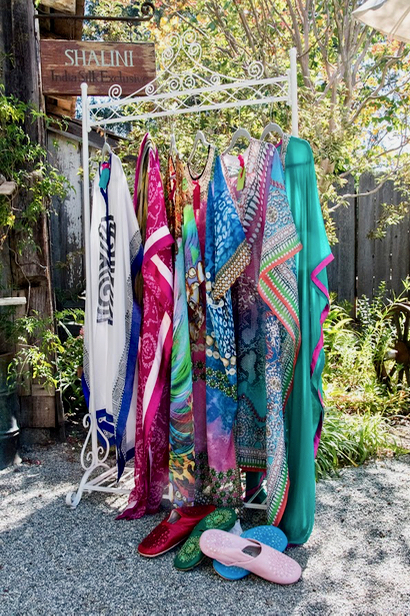 “I have a range of clients,” she says. “Some are conservative and some are more experimental. My joy every day is satisfying my clients, seeing them pleased wth the outcome of our work together.”

Shalini carries on a business that was first started by her grandfather, Sunderlal Mehta, in the 1960s, initially focusing exclusively on silk. After 15 years, he expanded into linen, cottons, and polyesters. Her grandfather stayed active until he was 99 years old, and Shalini’s mother has been fully involved in India Silk since then, working out of a Florida office. “It’s really fulfilling to carry on the tradition that my grandfather began,” she says.

Shalini’s mother was sent to textile school in Germany by Sunderlal. She was initially miserable before meeting and marrying a handsome German man who was an architect. Shalini spent her younger years in Baden-Baden in the southern part of Germany, and then attended an international boarding school in the Himalayan mountains.

Involvement in textiles wasn’t Shalini’s initial pursuit. After graduating from the University of San Francisco, she realized a dream by working in the magazine business in New York City. “I’d met my husband at USF and when we got married, we both wanted to come back to California,” she says. “Our first daughter was just one when we moved back and we added two more daughters.”

A citizen of the world, she is most content on the mid-Peninsula. “I love gardening even though I don’t do it very often. I love yoga and jogging and meditating. I love entertaining. I love traveling. I love people!”