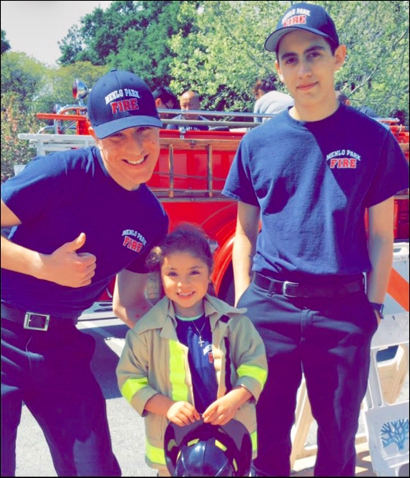 The three teenagers — Ricardo Torres, 19; Andrew Gonzales, 19; and Matthew  Cruz, 18 — who were killed in a vehicle accident on Halloween night on southbound Highway 35 (Skyline Boulevard) were not only very close friends, two belonged to Fire Explorer Post 109 sponsored by the Menlo Park Fire District, and one was the oldest son of the Fire District’s Master Mechanic, Rudy Torres, who has worked for the District for 14 years.

Wrote Fire Chief Harold Shapelhouman in a press release: “From directly assisting to locate the three boys early Wednesday morning to being on-site as they were carefully removed from the wreckage, members of the Fire District have quietly been reaching out to support all of these families who share an extremely deep bond through not only their children but also a sense of community that revolves around family values and time and activities spent together.”

Ricky Torres had grown up around the Fire Service, but it was his best friend Andrew Gonzales who had convinced him to join Fire Explorer Post 109 over a year ago. Ricky liked it so much he had recently applied for and been accepted to the South Bay College Fire Academy. He and Andrew had become friends 10 years ago and both had graduated from Menlo/Atherton High School together.

Andrew was a constant around the Torres household, as his mom Shelley said, his real dad wasn’t in the picture much, but he found a father in Ricky’s dad Rudy, who treated him like he was his own son. He was an “old soul,” she said, “he had a 401k opened at age 18, worked two jobs, was always smiling and positive.”

Matthew Cruz was interested in computers and programing. He and Ricky had met in Kindergarten at Nativity School and become best friends, later graduating from M-A together with Andrew. The three were always together. While Matthew was on a different career path, his father, Gary, talked about how close the boys and the families were, often taking trips and spending time together. “Matthew loved his friends and taking care of others,” his dad proudly said.

“The entire department is grieving the Torres family loss of their son Ricky,” said Fire Chief Schapelhouman. “They are an important part of our Fire Family. Rudy is much respected as one of our two master mechanics and we’ve watched his boys grow up. Ricky wasn’t just an Explorer, he was also working part time in Fleet Services for the Fire District for work experience.

“I just signed off on his paperwork so he could attend the Fire Academy and we were able to spend a few minutes together talking about how excited and proud he was to take this next step towards his goal in becoming a firefighter. Sadly, that was the last time I saw him.”