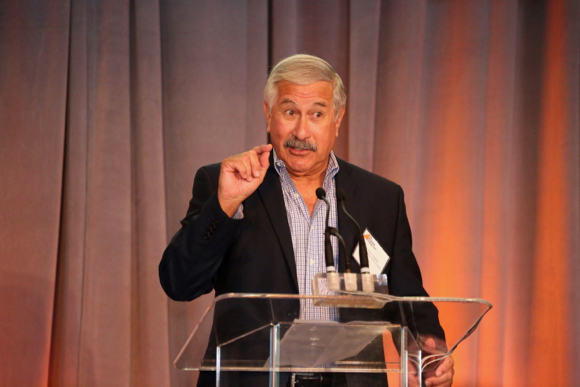 Stanford Professor Emeritus Dr. Albert Camarillo (pictured) spoke to an audience of 230 at Sharon Heights Golf and Country Club in Menlo Park on October 26, stressing the impact of a college education to uplift not only current first-generation students but also the next generation and their entire communities. The event was the second annual Community Engagement Luncheon of the Peninsula College Fund (PCF).

“Higher education has changed the lives of millions of Latino young people since the 1960s, including my own life,” said Dr. Camarillo, a Menlo Park resident. “My career has been about opening educational opportunities. I support PCF for its dedication to helping low-income, under-represented, first-generation students achieve success in higher education.” He noted that through its comprehensive scholarship and scholar program, over 90% of PCF students graduate from 4-year colleges and universities, three times the national average.

Founder and Board Chair Charles Schmuck, also a Menlo Park resident, reported on PCF’s recent and projected growth: “We doubled the number of scholarships from 2016 to 2017, with plans to increase by 50% next spring, with an accelerated reach into San Jose high school students.”

While thanking the particular generosity of donors like Facebook, Jay Paul Company, and Innovate Foundation, he also thanked “the hundreds of donors (many in this audience) who helped make this growth possible. “While this growth is exciting”, he challenged the community to help PCF do more in 2017-18 to answer the serious need. “In 2017, we received over 165 deserving student applications and were only able to fund and provide support to 40 scholars. Our goal for 2018 is to accept 65 students.”

Donations to the organization can be made online.