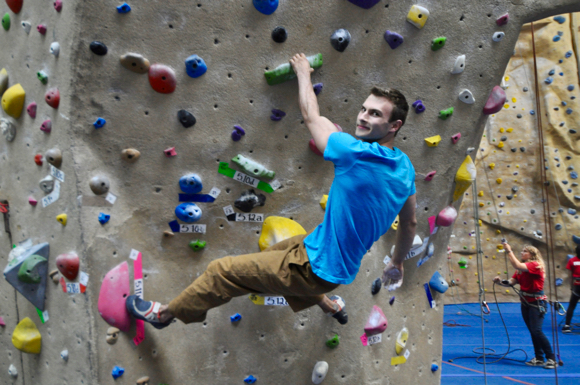 Update Feb., 2018: Jake has been named to the U.S. national team and will compete at the youth world championship in August. Rock climbing will be will an Olympic sport in 2020.

Menlo Park resident Jake Scharfman stumbled upon what would become his passion — rock climbing — in the summer between 7th and 8th grade at Peninsula School.

“My uncle was a really big climber, and I knew about Planet Granite,” he recalled. “Then I did a rock climbing camp there, and it just clicked. I’d played various sports, but this was the perfect blend of physical and mental that also balanced individual skill along with community.” 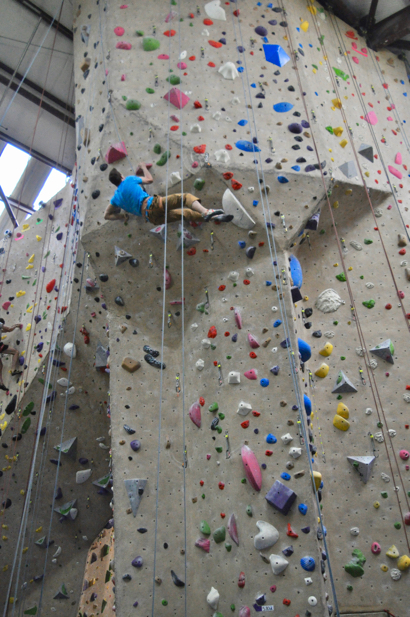 Since then, he’s competed locally, statewide and around the nation in his sport, which included a first place in the 2017 Redbull Rapid Ascent in a world record time on the world’s tallest climbing wall.

He explained there are two different kinds of indoor climbing: roped climbing which is done on taller walls with “ropes so you don’t hurt yourself if you fall” and bouldering, shorter walls “with matts underneath to the break a fall.”

“I excel at bouldering,” Jake said. “My biggest achievements have been made just five feet off the ground!”

While he’s indoors most of the time, he’s scaled the sides of cliffs 1,000 feet tall. “Castle Rock State Park is the best local climbing area,” he said.

To those new to a climbing gym, the hand holds on the various walls may seem too tiny to grasp. But that is part of the challenge. “It takes a lot of training and a lot of finger strength,” he explained.

Jake is completing his senior year at Kehillah Jewish High School, and soon it will be on to college. He’d love to land someplace where there’s opportunity for climbing and also to hone what he thinks will be his focus of study, digital design and photography, although somewhat surprisingly, portrait photography interests him more than landscape.

“Through climbing I have been able to travel extensively, gaining tremendous respect for our planet, and the beauty it holds,” he wrote. “Not only that, but I have found a place for myself like no other, and I will always love climbing for giving that to me.”