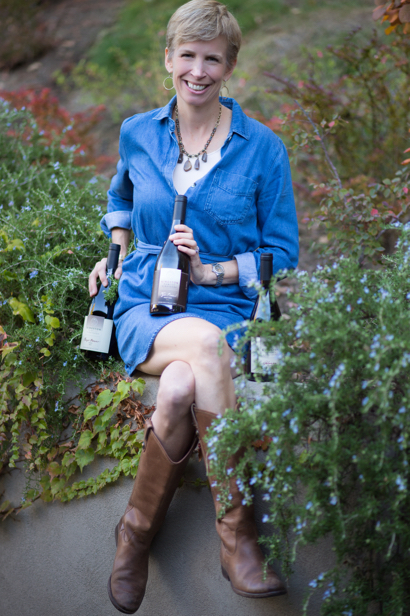 Courtney Kingston’s life’s been a bit farm to farm. She came to Stanford to get her MBA, writing a business plan about how to convert her family’s dairy farm in the Casablanca Valley in Chile into a Pinot farm by planting grapes on the western hills.

“We even have a Palm Drive going into our farm, although the palms aren’t as big as Stanford’s Palm Drive,” she said.

Courtney is the fourth generation to be involved in the dairy farm and cattle ranch that the family patriarch, Carl John Kingston, founded in the early 1900s.

“Our family motto has long been ‘how are you going to help the farm’?” she said. “That’s followed up with ‘don’t quit your day job,’ which was good advice as I had lots of student loan debt after graduating so I worked in tech for five years, always trying to learn what could be transferable skills.

“We also don’t ‘bet the farm.’ So we did a lot of soil analyses and talked to California vintners, large and small. We planted Pinot Noir and Syrah in 1998 in an area that had mostly yielded white varietals.”

Today they produce about 5,000 cases a year of Pinot Noir, Syrah, Sauvignon Blanc and Chardonnay.  Most is sold direct to consumer through the website, although the wines can be found locally at Bianchini’s in Ladera and K&L in Redwood City.

The North American headquarters of Kingston Vineyards is run from a home office in Ladera, with Courtney working alongside a staff of fellow Laderans. [Editor’s note: Before meeting Courtney, we’d long been puzzled why a Chilean wine was among the small selection of Pinots sold at Bianchini’s — and why it had a prominent place adjacent the meat counter. Now we know!]

Courtney calls Pinot Noir “the heartbreak grape.” “It’s difficult to grow and difficult to make — and all about finesse and not about power. The best thing about Pinot is that it speaks to where it’s from.”

While Kingston Vineyards has practiced sustainable farming for years, it is now on the path to getting certified organic, a process that takes three years. “Sustainable and organic — it’s about the long term stewardship of the land,” says Courtney, “the land that’s been in my family for 100 years.”

Fun fact: Kingston wines are named after the farm’s horses!