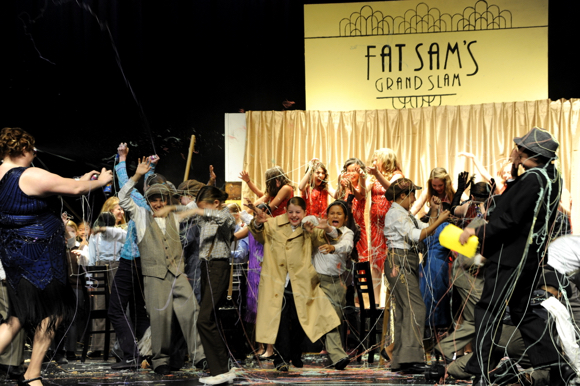 Emails Gina Hart: “At the finale last night of Bugsy Malone, Jr., 4th and 5th grade Encinal students took one final bow for their audience. Little did they know that their directors and a few sneaky parents had a Silly String attack planned.

“After Bugsy Malone displayed his two golden tickets to Hollywood with Blousey Brown, they smiled, took a bow and then shrieks of laughter broke out as everyone on stage was unexpectedly sprayed with the splurge props filled with silly string. It was quite a sight!

This was such a fun play to watch! Kudos to the teachers and parents who helped make it happen, and to Gina for taking great photos.

love it! Thanks for documenting a great night!