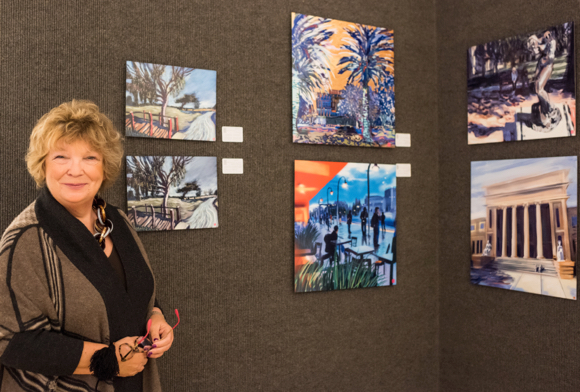 It all began, as Caroline Mustard told InMenlo in the fall of 2013, with the gift of an iPad from her son. It rekindled her creative roots which led to her not only creating art but teaching art.

Now it’s landed her a show at Art Ventures in downtown Menlo Park called iPad Art: Places, 3 Brits in Silicon Valley. “I’m joined by Jeremy Sutton (a Brit in San Francisco) and Adam James Butcher (a Brit who is living now in Mexico, who is also writer for Huffington Post on digital art.) The exhibit will be on display through December 24.”

Caroline says her involvement with iPad art “reinvented my whole life.” “The iPad reconnected me to artistic style. It got me back to drawing.

“Equally important is the desire to share and inspire others. The teaching part of it is just as important to me.”

Many of Caroline’s students were at at the opening reception at Art Ventures on December 1st.

“What a great evening,” she said, “and thrilled that my big painting called Union Square was sold as was my large Google Bikes painting.”

More of Caroline’s art can be viewed online.

caroline….where r u darling. its been years and years. glad to see your boys have done so well! and you too.