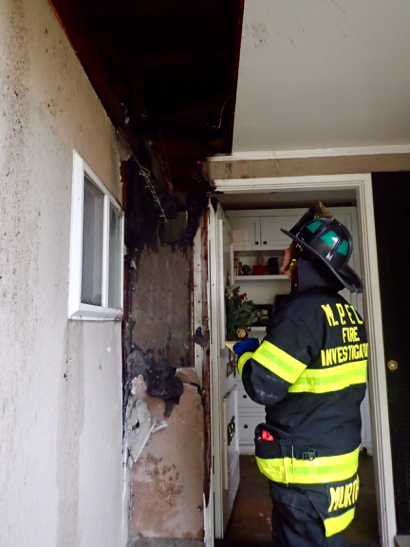 Shortly after 6:00 am this morning, Menlo Fire responded to smoke coming from the roof of a home on San Mateo Drive in Menlo Park where they found a fire burning around the door casing of the front door of the home.

The small fire was quickly brought under control, and the rest of the home and attic were checked by 6.32 am.

When Battalion Chief Dan Coyle arrived on-scene, he was informed that retired Menlo Fire Assistant Chief Ollie Brown, who lives a few blocks away, had been out walking his dog when he noticed the smoke and alerted a neighbor, who then called 911.

Fire investigators were requested to respond at 6.38 am along with PG&E. Fire Marshal Jon Johnston worked closely with PG&E to determine the cause of the fire. The origin area was determined to be around the front door which only had a low voltage door bell wire running through it, but the wood was burned around every nail in the door casing, which was highly unusual.

The crew from PG&E found that a squirrel had chewed through the neutral wire at the nearby power pole and that line had then dropped down onto the power line to the home potentially frying the homes electrical system and essentially energizing the entire home.

“This isn’t the first time we’ve had a squirrel cause power problems in Menlo Park,” said Fire Chief Harold Schapelhouman. “In August of 2016, a squirrel bit into a power line which then exploded a transformer, knocking out power to downtown Menlo Park. [This effected] over a thousand PG&E customers, trapping people inside elevators who then needed to be rescued by our firefighters”.

Fire personnel left today’s scene at 8.30 am only to return at 10.30 am to find another hot spot in a wall next to the main electrical panel. “We are watching this home closely because it’s obvious the whole house was energized and that we have the potential for deep seated hidden fires inside the walls,” said the Chief. “The crews are using thermal imaging hand held devices to check the home and attic every couple hours so we don’t have to destroy the walls and ceilings looking for fire.”