Shortly before 7:00 pm on Saturday, January 3, 1998,a fire at, or near, the abandoned Sportsmen’s Gun Club located off of University Avenue at the tip of the City of East Palo Alto was reported to the Menlo Park Fire Protection District.

Acting Battalion Chief (B/C) Harold Schapelhouman (pictured below), now the District’s Fire Chief, thought the call odd because it had been pouring rain all day with heavy winds but believed that perhaps one of the few remaining abandoned structures could be on fire. 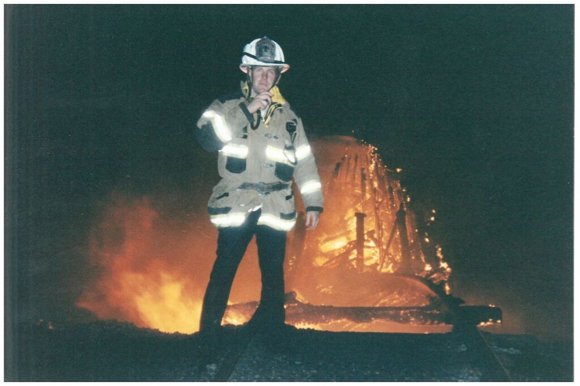 Menlo Engine Two with Acting Captain Tom Calvert arrived at the abandoned Sportsmen’s Club a little after 7:00 pm and reported that they definitely had a fire with heavy black smoke showing, but it appeared to be along the old Dumbarton Rail Line further past the Club property and near San Francisco Bay.

Schapelhouman maneuvered his command vehicle along a narrow dirt path along the abandoned rail line as the car was pelted by rain and buffeted by heavy northerly wind gusts. “I could see the glow of a significant fire with lots of black smoke and when the path ended I had to walk the last 50 feet only to find, much to my amazement, that the entire railroad trestle that extended deep into the Bay was on fire,” he said. “It looked like half-mile long section of wooden supports and track were fully involved in fire. I thought to myself ‘how did this get such a head start on us, and how the heck am I going to put this fire out?’” 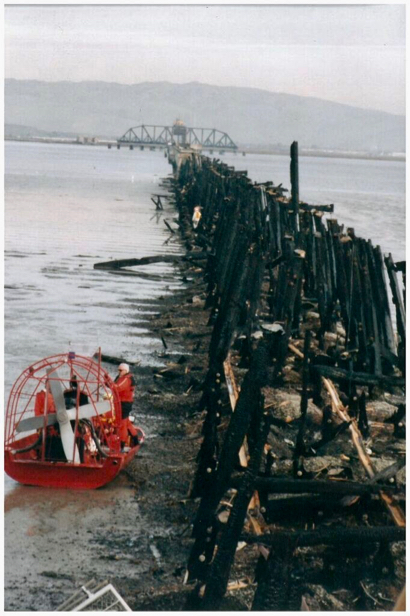 The Dumbarton Rail Bridge was the oldest and first bridge across the San Francisco Bay. It was built in 1910 as a single track rail crossing at the narrowest part of the Bay so freight could be shipped back and forth to San Francisco from the East Bay. It opened in 1912 and shut down in 1982. The section on fire was 1,766 feet of heavy timber that had been soaked in Creosote to preserve and protect the timbers.

Creosote is also a known carcinogen and toxic. The cloud of heavy black smoke was blowing horizontal over the nearby Dumbarton Auto Bridge, and the first order of business was to completely shut it down and issue health alerts downwind to other communities. “As it turned out, most of the complaints for respiratory problems occurred 30 miles away in Oakland that evening,” said the Chief.

With limited access, Acting Captain Ben Marra was put in charge of “land based” firefighting operations. Initially, that consisted of calling for the Woodside Fire Protection District’s Water Tender (tanker), typically used as water supply for wildland fires. A full mile of supply hose from multiple fire engines was laid out just to reach the fire from the closest water supply.

Simultaneously, Captain Frank Fraone was placed in charge of “water based” firefighting operations, and, using the Fire District’s Air Boat, a floater pump and hundreds of feet of light weight single jacketed hose, attacked the rail deck that extended over the water. 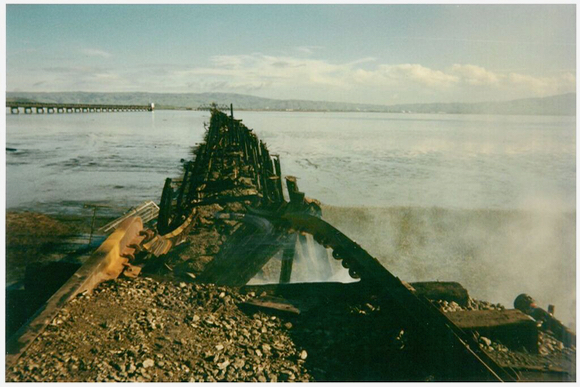 “We caught a break as the rain all but stopped and the wind died down, but laying out a mile of hose takes a lot of time and manpower especially when it is mostly done by hand,” the Chief recalled. “And getting the boat in the water with all of the firefighting equipment also took time.

“Also, we couldn’t have picked a worse Bay tide. The minus tide meant that almost the entire span was over mud, not water, which resulted in hampering our ability to fight the fire because the floating pump needed an actual water source.”

As the timbers burned and fell off the trestle onto the mud, when the tide did start to come in, they all started to float north down the Bay towards Redwood City. “We let the Coast Guard know,” Schapelhouman said. “It was like something out of a Viking movie, but there was only so much we could do at that point to put them out and drag them to shore. Dozens of timbers simultaneously disappeared down the Bay.”

By morning much of the fire was extinguished, or had burned itself out, but deep seated fire continued to burn in multiple areas and the Fire Boat Phoenix from the San Francisco Fire Department was requested and arrived at mid-day to help put out the remaining hot spots.

The fire had also burned down into timbers located under an earth berm at water’s edge and several days later the Fire District would need to load a Fire Engine on a rail transport in order to access the area and work in conjunction with a backhoe to tear the berm apart to eventually extinguish the deep seated and stubborn fire.

Twenty years later, Fire Chief Schapelhouman observed: “We deemed the fire suspicious due to lack of evidence of actual arson, and over the years I’ve heard a variety of conspiracy theories, but it certainly was one of the odder and frustrating fires I’ve been confronted with in my career.  A it was the only simultaneous land and sea fire I’ve ever faced, especially at such a historical landmark. There was obviously only so much we could do.

“I recently read that ‘little is known about the trestle fire,’ but that’s not exactly true. We never released any of the pictures due to the investigation, and with renewed interest in actually using this rail route again someday, I figured when I came across the information and photos it was a good time to actually tell the story of the night a portion of the oldest and first bridge across San Francisco Bay burned.”