In Jill Layman’s mind, the opening of her art and event space in downtown Menlo Park was “like the universe snowballing in the right direction.”

“I’d considered going back to the corporate world and also thought about opening a cheese shop,” she said. “Both times, I hit a wall. But with A.Space, everything just came together.”

Jill, who also lives in Menlo Park, took a ReBoot Accel one-week, immersion class a few years ago to hone her social media skills. “It was a great experience not only for what I learned but also the confidence I gained knowing there were other women like me out there,” she said. “I no longer felt isolated, thinking I was not as accomplished because I’d stayed home with my kids for a number of years.”

The seed for A.Space happened 30 years ago when Jill attended a trade show in Southern California and one of the customer events was held at a Laguna Beach art gallery. “Everyone enjoyed the experience,” she recalled, “and it stayed at the back of my mind.” 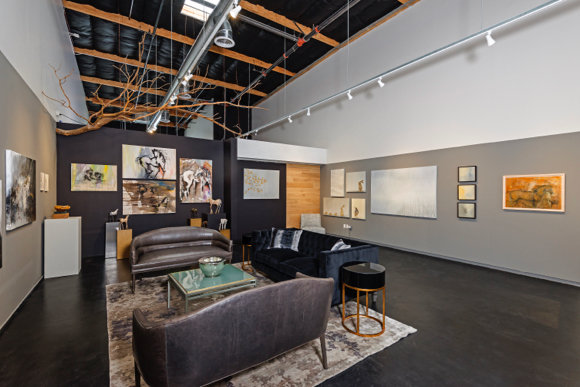 Also at the back of her mind was the kitchen/bath fixture store that she’d bought a few things from when doing a home renovation. “I told the owner, ‘if you ever decide to move on, I’d like first dibs on taking over the space,'” she said. “I was contacted last July, took over the space in September and opened in October!”

Initially, the artists on display include three that she has collected — Siri Hollander, Bella Bigsby and Laura Morton — as well as Ron Richmond, who she’s known since they attended high school together. A complete list of artists whose works she’s exhibiting can be found online. The gallery is open Tuesday through Saturday from 11:00 am to 5:00 pm.

On the event side of her business, Jill can accommodate receptions for up to 100 along with small, progressive dinners that move from one part of the space to another. “My goal is to offer a visually stimulating space for your event, be it large or small,” she said.