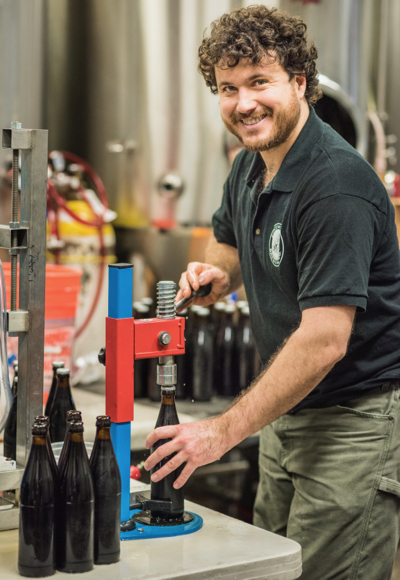 Some people’s vocations are a bit of a zig zag, even at a young age. Such is the case with Orion Lakota, whose name even has a story.

“My parents chose a new last name, Lakota, for both me and my sister, Raven,” he explained. “It’s after the Native American tribe.

“Orion came about because my mother, who grew up in New York City and rarely saw starlight, was walking with my father, who grew up in Alaska and was well versed on the constellations, the night before I was born. He showed her Orion, and when she looked out the window after giving birth, there it was. I’m meeting a lot of Orions lately, although they’re usually age five to 10!”

Orion is the relatively new brewer at Freewheel Brewing Company, an occupation he didn’t envision when the Vermont native moved west to attend Stanford where he majored in geology, thinking he’d pursue a career in climate science. While he spent some time after graduation at the US Geological Survey in Menlo Park, he soon decided lab work wasn’t for him.

While contemplating whether or not to go to graduate school, he got a job as an apprentice with artist Oleg Lobykin at StoneScuplt, which specializes in custom stonework and stone masonry restoration. “We worked on some of the restorations on the Stanford campus,” he said.

It was at Stanford that Orion first got interested in beer. “I was the social manager of my co-op for a couple of years. One of my responsibilities was stocking the beer refrigerator, and I’d try to find distinctive craft beers for variety.

“Then when I graduated, I moved in with a friend whose last roommate had left all of this brewing equipment. I’d wanted to learn to brew for some time and that got me started. That was 12 years ago and eventually led to my working here at Freewheel.”

When the brewery first opened, the emphasis was on cask-conditioned ales. But lately the brewing team has been doing a lot more keg beer. Explained Orion: “Cask ale finishes fermentation in the cask. The yeast is still active. Keg beer fermentation happens before it goes into the keg. We now feature about a dozen that we regularly rotate on tap.” A complete list is on the Freewheel website.