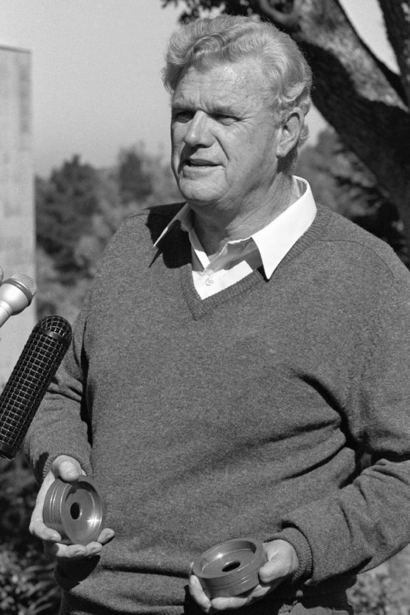 Richard Edward Taylor, one of the pioneering particle physicists working at the SLAC National Accelerator Laboratory in Menlo Park, died at his Stanford campus home on February 22 at the age of 88.

Taylor was an early user of the 2-mile-long linear accelerator at SLAC and carried out experiments that revealed subatomic particles called quarks for the first time – a discovery that earned him the Nobel Prize in physics along with colleagues from the Massachusetts Institute of Technology.

Taylor’s discovery of the quarks set the stage for what is now known as the Standard Model in physics, which describes all the fundamental particles and forces.

“Dick Taylor has been an important presence in my life since I was a child,” said Persis Drell, Stanford University provost and former director of SLAC, who grew up on campus. “He was a towering figure – both physically and intellectually. But beneath his gruff exterior was a heart of gold. His Nobel Prize research with Jerome Friedman and Henry Kendall put SLAC on the map. They demonstrated that the proton was ‘jam’ with seeds [the quarks] rather than a smooth ‘jelly’ of charge.”

Taylor came to Stanford for his doctoral work in 1952, a time when he described the physics department as “exciting beyond description.” He soon joined the High-Energy Physics Lab (HEPL) and began work on accelerators. In 1958, he set his doctoral thesis aside to spend three years in France at the École Normale Supérieure helping to build an accelerator in Orsay.

In 1961, he returned to California to work at the Lawrence Radiation Lab in Berkeley, but was drawn back to Stanford one year later with a role at what was then the Stanford Linear Accelerator Center, at first to help establish the accelerator, then as a faculty member performing experiments as part of a collaboration. In that same year, 1962, Taylor completed his long-delayed dissertation and earned his doctorate.

It was his early adventures colliding an electron beam into a proton target – in what was then known as elastic and inelastic scattering experiments – that would lead to the collaboration’s groundbreaking work and, eventually, to Taylor’s Nobel Prize. Those experiments indicated the proton itself, once thought a fundamental and indivisible atomic particle, was in fact composed of smaller particles.

Les Cottrell, now manager of computer networking at SLAC, began working with Taylor in 1967 on his experiments that led to the quark discovery. “The thing that always impressed me about him was that he was an integral part of the experiment, not just the boss,” Cottrell said. “He would show up at 5 in the morning to take his shift, and he would be there in the evening when the lab director, Pief Panofsky, came to check on how things were going.”

Taylor shared the Nobel Prize with Jerome I. Friedman and Henry W. Kendall of MIT. At a celebration the day the Nobel was announced, Taylor thanked some 30 people saying, “I’m here because I’m probably the oldest and loudest of the group.”

In addition to his facility with physics, Taylor was a quick wit with a self-deprecating streak. At his Nobel banquet speech, Taylor was challenged “to be witty.” Examining the object of his crowning achievement, the quark, he was flummoxed.

“After a great deal of reflection, I have decided that quarks are just not funny. They are too small. Most of the time not much happens to a quark, and if something does, it is more likely to be catastrophic than amusing. … Quarks just don’t care.”

In the end, however, he was circumspect about his life’s work: “The quarks and the stars were here when you came, and they will be here when you go. They have no sense of humor so, if you want a world where more people smile, you will have to fix things yourselves.”

Photo of Richard Taylor in 1990 by Chuck Painter