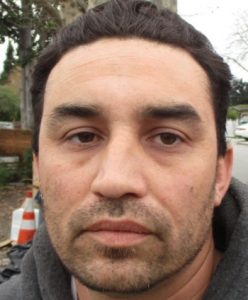 The Menlo Park Police have issued a warrant for the arrest of José Gutierrez (DOB 1/12/82), a suspect in relation to a shooting incident late Saturday night. He is considered armed and dangerous and is associated with a silver Honda Accord with a license plate of 5ZCK527. Menlo Park Police Detectives have located the AR-style rifle in the suspect’s residence that was allegedly used in the shooting incident

On Feb. 24, 2018, at approximately 11:00 pm, Menlo Park Police responded to the 1100 block of Sevier regarding a person seen firing an assault-rifle style weapon in the backyard of a residence. According to witnesses, the subject was upset due to a loud party next door. No one was injured.

Officers set up a perimeter around the residence and attempted to contact occupants inside the subject’s home. Officers were unable to obtain a response from anyone. According to witness accounts of the incident, it was believed that a male subject could still be in the home armed with an illegal firearm.

The Menlo Park Police secured a search warrant, and shortly before 9:00 am this morning (Feb. 25), the San Mateo South County Regional Special Weapons and Tactics (SWAT) team made entry into the residence at 1122 Sevier Avenue in Menlo Park and conducted a search for the suspect in this incident.

Their search failed to locate the suspect, but did locate significant evidence that a shooting had occurred. After securing the residence, the SWAT team turned the scene over to Menlo Park Police Detectives who are currently processing it and collecting evidence.

So, the PD determined that “it was believed that a male subject could still be in the home armed with an illegal firearm”. Did they determine if the male suspect is illegal???? What makes the firearm “illegal”?