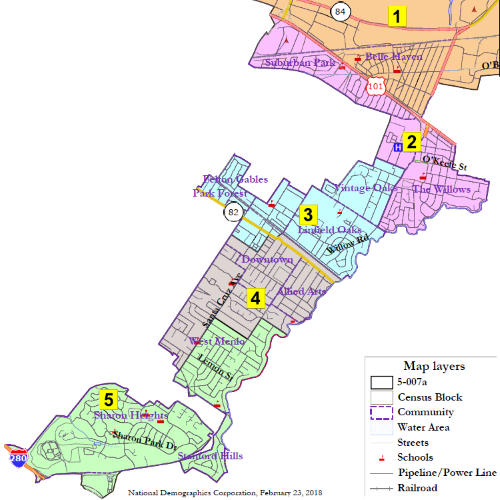 The Advisory Districting Committee presented its results to the Menlo Park City Council:

The Committee met eight times in six weeks. During the process, the Committee relied on criteria outlined in the City Council resolution and federal and state voting rights laws. The Committee supplemented these criteria and organized them into primary and secondary categories.

The Committee recognized early on that there are major issues involved in the districting process, including how to keep the Belle Haven neighborhood together, and how best to represent the various interests among those near the El Camino Real corridor and in downtown along Santa Cruz Avenue.

To help address these issues, the Committee conducted outreach efforts, including distributing flyers in various neighborhoods, conducting polls on Nextdoor and Facebook, and held a meeting in the Belle Haven district. The Committee received input from the public on these and other issues, in the form of statements at the meetings, submitted maps and email comments.

In the course of the process, the Committee recognized several factors that impacted the possible solutions. The outline of the city’s boundary is very irregular and includes natural bottlenecks. Consideration was limited to the 2010 census data, which does not reflect recent residential developments, and by the shape and populations of the defined census blocks. The requirement to balance populations in some cases resulted in awkward shapes of the districts, especially in the six-district map.

In the end, after taking into account all these factors, the original criteria, public input and considering almost 40 maps, the committee arrived at its recommendations.

I think that an important question goes unaddressed.

Because of Menlo Park’s staggered council seat elections and the geographic location of its current council members, one district in any of the proposed 5-District solutions would be left with “at-large” representation during the upcoming election cycle, i.e. that district won’t get to choose this time around.

My question is: “In utilizing the 5-District solutions, is it that incumbency is favored over random assignment in determining the participation sequence for the districts eligibility to vote?” If “yes,” the question that I have is “Why?”

To my knowledge, there is no law dictating that incumbency be the deciding factor in determining which district gets “left out” of this election cycle. While I can understand incumbency as a consideration, I believe that random assignment of the eligible districts (excepting Belle Haven) would have been more in line with the spirit of this transition.

Furthermore, an argument could be made that if incumbency is the overriding concern, it should be in the opposite direction, i.e. any two-term incumbent has been on the council for a significant period of time and should thoughtfully consider making room for “new blood.” The notion of destroying “institutional memory” by “terming out” an elected official, while potentially relevant at the state and national level, I do not believe is applicable at the municipal level.

Full disclosure: I live in “District 2” under the proposed 5-District solutions.