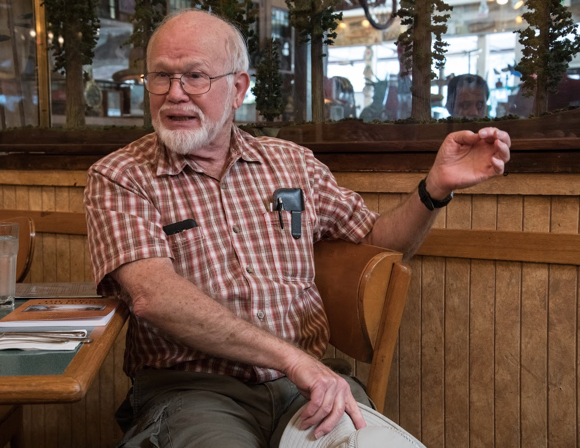 If you ever eaten at Buck’s in Woodside, you’ve probably wondered: “What’s with all this stuff? Is it real — or fake?”

The answer to the first question is rather straightforward. The stuff that covers the wall, stands on the floor, and hangs from the ceiling are items hand-selected by Jamis MacNiven, who owns the restaurant along with his wife Margaret. It is all real, in the sense that it exists. Now, thanks to Jim Lyons (pictured top), we know the story behind the items, or at least the story Jamis wants us to know. 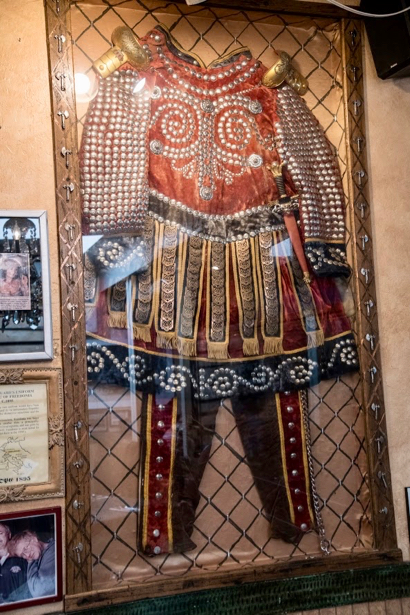 Working with Jamis and a photographer, Jim has documented nearly 400 items that are historic, scientific, artistic — or just strange. The result is a book called The Buck’s Collection, which is available at the restaurant “There are probably  things you didn’t know are here as well as some which you think should not be,” Jim said, adding, “The collection is really Jamis. It’s his personality, his interests, a reflection of him.”

Jim was trained as a physicist and worked in computer science before retiring, and Jamis pokes good fun at Jim’s methodical and detailed accounts of the collection in one of the two introductions to the book: “I…read Jim’s introduction where he expresses some skepticism over the veracity of my claims about this or that. The man is a perspicacious engineer and trained to look at the literal. Poor fellow.”

Therein lies the challenge of zeroing in on what is meant by “real.” Take the Freedonian Guard’s Uniform, looking ever bit like something out of Medieval Europe. Except that Freedonia isn’t a real place but rather the setting of the Marx brother’s movie, Duck Soup.

But story doesn’t stop there. Jamis tells Jim that it was an Odd Fellow uniform from the 19th century made for Schuyler Cox when he was Vice President after the Civil War. Jamis admits adding the military epaulets and dagger. [Confession: Googled Cox’s name and while a Schuyler Colfax was the 17th Vice President, there was no Schuyler Cox; of course, that could just be a name confusion!]

None of this fact versus fiction really matters when there’s a local restaurant where you can enjoy the food and wonder at all the stuff surrounding you. As Jamis writes: “It is a boy box, my toy box, in my play room with you — my friends.”