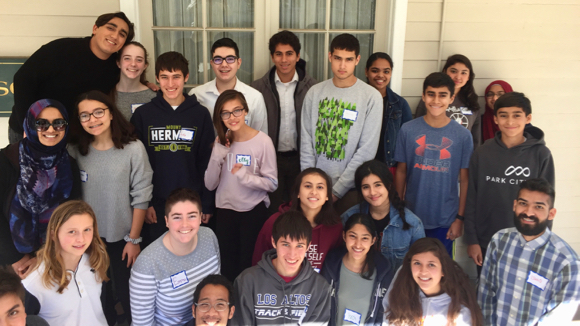 Youth from Trinity Church in Menlo Park spent an afternoon with Muslim youth on Sunday, March 4, part of an on-going exploration that focuses on raising awareness about the lives and faith practices of the two groups.

Last fall, the local Episcopal church began a year-long theme of Interfaith Harmony, which included  large-scale events such as Trinity’s Annual Hearts for Justice Conference, along with smaller events involving Trinity’s youth group. The first event for youth involved four Muslim teenagers from INGYouth (Islamic Network Group) who presented on the topic of being Muslim in America. Sunday’s event invited back INGYouth as well as a group of youth from the Muslim Community Association (MCA). 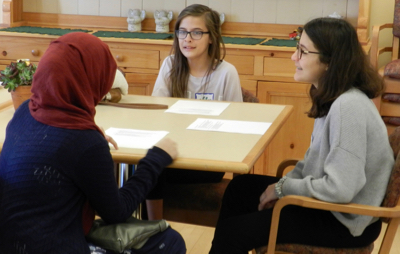 “Last year, I reached out to Ishaq Pathan of INGYouth to see if we could have some Muslim youth come speak to us,” explained Patrick Kangrga, Trinity’s Associate for Youth Ministries. “The Executive Director of ING was on the schedule to speak to our adults, and so it seemed like a very logical thing to match our youth programming to what the adults were doing and learning. 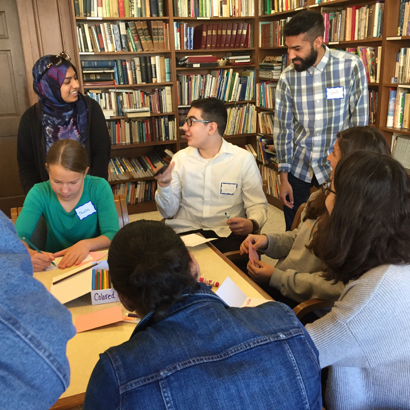 “I was looking for more than a one-off event, something more long-term with additional events. We locked in some dates, and, along the way, were able to have Lubna Shaikh of MCA join  us.

“During a lunchtime meeting, we came up with the idea that since most Christian churches are currently in the season of Lent,  it would be interesting to tie that Christian tradition to the Muslim tradition of Ramadan, both which focus on fasting and prayer, among other things.

“As we ate, we began to enlighten one another about our traditions and how we experienced them. So the hope was that our youth would have that same experience with one another.”

The youth not only shared lunch and learned about one another and their faiths but also joined together in a service project.  Last week, Trinity youth went to the There With Care warehouse in Redwood City to put together birthday kits for sick children. On Sunday, birthday cards were created to add to those boxes. In addition, placemats and lunch bags were decorated; they will be donated to a Meals on Wheels program.