Full disclosure: this writer was not there the day 25 years ago that the Peninsula Times Tribune ceased publication (here’s the Tribune Co. announcement), We’d left three months earlier when a friend from high school called and asked us to join his start up. 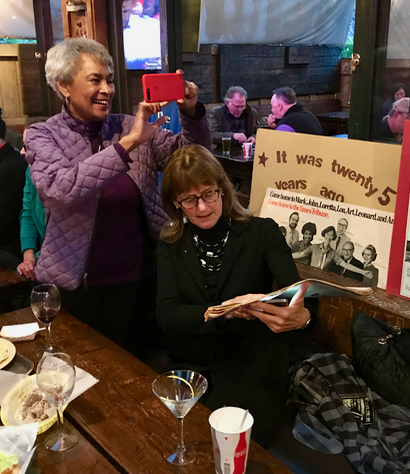 But that in no way diminished how much we enjoyed working for that paper on the business (not editorial!) side from 1990-92. We’d just “come home” to Menlo Park after a couple of decades in Southern California and working for a community newspaper after a near decade at a national magazine was gift.

So it was a privilege tonight to share some toasts and meet up with colleagues from years ago at the Dutch Goose in Menlo Park, organized by Chris Preimesberger, with assistance from Franklin Elieh, who was working on a similar effort, so they joined forces.

Twenty-five years is awhile ago and how great to see faces that made every day working there a pleasure. A special hats off to Loretta Green (left in right photo) and Chris Kendrick (right in side photo) who clearly have the ageless gene!

(PS: My dear spouse worked at both the Palo Alto Times and Redwood City Tribune as a paper boy – remember that job?)

Such great memories of working there for 7 years. Receptionst, circulation clerk, data entry, and retail billing supervisor . One sad moment upstairs getting the announcement.