Photographs by long-time friend of Menlo Park, Glenn Raggio, titled Images on Metal are on display at Cafe Zoë through the end of March. 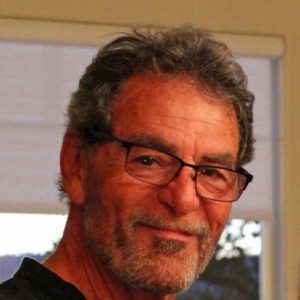 Glenn served for 15 years with the Menlo Park Police, where he was appreciated for his unique style of community policing as well as his regular newspaper column for the Almanac News, in which he recounted on-the-beat adventures and revealed policing mysteries. Following his service to Menlo Park, he worked for the San Mateo County Sheriff’s Office as a Deputy Sheriff. Now retired to the Yosemite area, he pursues what he characterizes as “special effects photography.”

“I’ve been told my forte is to see a picture and then crop a portion out of it,” he explains. “I work on the photo and create different effects on them.”

An appreciator of nature, Glenn enjoys trips up the Mendocino coast, and a number of the photographs on display at Cafe Zoë feature the area, including two that are shown here. “Elk is my favorite place on the planet,” Glenn says.

When not taking photos, Glenn can be found golfing or writing – he’s working on a mystery novel based on his patrol duties on the coast – and, more recently, has taken up singing.

But he retains fondness for police work: “I had actually wanted to go into law enforcement most of may life. I was a single parent and as soon as my two daughters were old enough and off to college, I went to the Academy where I was the oldest person. I absolutely loved the work.”

Glenn, it’s been a long, LONG time! I have had you on my mind for a number of years, as I reconnected with you while you were still in law enforcement…but again our own personal lives got in the way and I lost track of you again. WE go way back & treasure the years we had known each other…was about 4-5 years out of College when we met. We played ball together for a LONG time…FUN TIMES! I knew you had said you made plans to retire up in the Yosemite area, as you now have. I hope you get this message and either email me or call me at this number 510-714-7623. I would love just to “catch up”, on you your daughters, Tracy & Shannon, NEW Life, etc. If you have any desire to catch up, I would like to do the same. It has been too long. Take Care Brah. Hope to catch up with you. Is your work still on display anywhere? LMK. ALOHA for now