Hillview Middle School student Devin Leslie took the microphone on the quad at Hillview Middle School this morning at 10:00 am and said, “This is your day.” He invited students to leave their backpacks and “make your voices heard” by joining the National Walkout in support of ending gun violence.

Hundreds of students participated in a march out the school gates, down Elder Avenue and on to  Santa Cruz Avenue, with signs and chants of “No more silence, end gun violence!” Passing motorists honked their support, eliciting cheers from the enthusiastic students. 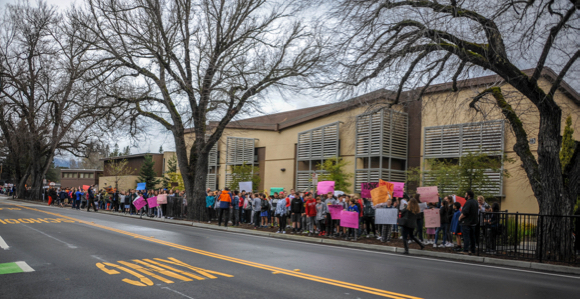 Staff and parents joined the students, keeping them safe along the roads, but mostly looking on with emotion and support as these young people found their voices in the collective call for tighter gun laws in the wake of the February 14 Parkland shooting.

After standing along Santa Cruz Avenue for a few moments sharing their message with the passing cars and pedestrians, the students moved back on to Hillview’s quad for a closing ceremony. Students Lute Finau and Willow Schmidt read poems they had written. In Stay Woke Lute petitioned “But I hope that our generation knows how to love and not hate nobody. And yes I know sometimes I never practice what i speak / But a deeper understanding of what i say makes me realize I should never be weak…. I wanna make sure that future generations come to school safe and sound / Coming home with no gun shot wounds all around / And is it not enough to say that 1 person lies dead in a grave?”

Willow declared in Guns that “You hear stuff like, ‘we send our thoughts and prayers to the victims’ but it doesn’t matter / if you wish upon the biggest star, or don’t decide to not pay any attention to these issues, because sending ‘positive vibes’ does absolutely nothing…Let’s stop sending our ‘thoughts and prayers’ and ‘positive vibes over twitter and start using the energy used in tweeting to actually fix the issue at hand so we never have to apologize for another mass shooting again. No more will we just wait around, we are done.’”

Hillview student leaders read a joint speech imploring “legislators to do their jobs. We care about common sense gun law. We are the next generation of voters, and we will make a change! Seven thousand children have been killed by guns in the US in the last 5 years. We need to step up and fight and show adults we won’t let them make decisions for our future without listening to us. They’ve had their time; now it’s ours.” 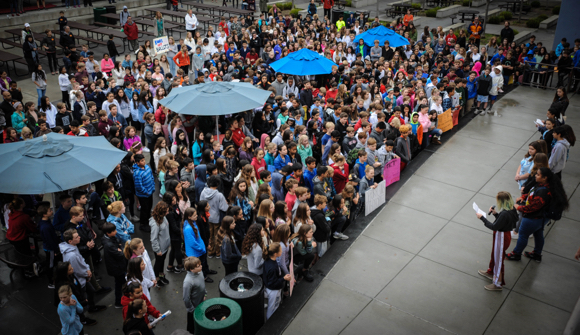 The rousing and action-oriented speech was met with loud cheers by students who have clearly taken a tragic moment and decided to step into the void of adult action with their own energy. The names of the 17 victims at Marjory Stoneman Douglas High School were read followed by 17 seconds of silence.

The day’s events included an open microphone at lunchtime during which students shared feelings from outrage at the ease of purchasing guns to determination that they will make a difference. A “We Stand With You” banner for the Parkland student survivors was signed by hundreds of supportive Hillview students. The Hillview chorus sang two emotional songs, Corner of the Sky from Pippin and Waving Through the Window from Dear Evan Hansen. 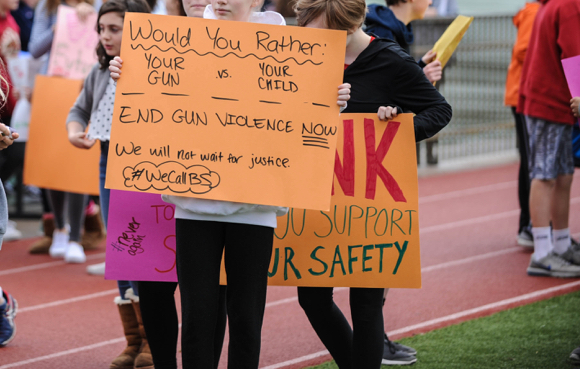 Principal Willy Haug, who had walked along with the students, said afterwards: “ We are so proud of our students for their thoughtful efforts to encourage free expression here at Hillview. Today’s activities were deeply moving. The credit goes to the students; they planned and made this day happen, and these are the moments we live for as educators. Our future is in great hands.”