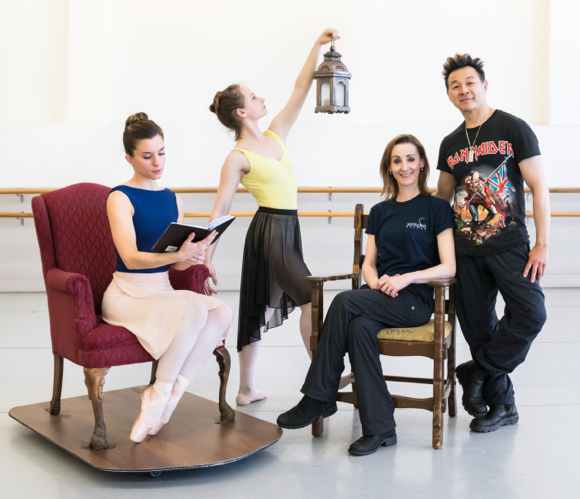 Menlowe Ballet’s 2018 spring season — Illume — is fitting, in particular, because one of the three ballets is based on the life of Florence Nightingale. A tribute to the visionary who revolutionized the nursing profession, The Lady with the Lamp is choreographed by Menlowe Artistic Director Michael Lowe and Associate Artistic Director Sarah-Jane Measor.

“The world premiere of The Lady with the Lamp continues Menlowe’s commitment to honoring the spirit and accomplishments of women from history who have touched the world with courage and creativity,” said Lisa Shiveley, the company’s Executive Director. “The performance comes at the end of National Hospital Week, and we’re encouraging doctors, nurses and other medical staff to attend together.” [Note: Group discounts are available; contact Lisa[at]menloweballet.org.]

Talking with Michael and Sarah-Jane, we learned the idea of choreographing a ballet about Florence Nightingale was first introduced when thinking about women who should be included in Portraits, part of the company’s first anniversary show two years ago.

“But we didn’t want it to be truncated,” said Michael, “so decided to do more research on Florence. The resulting ballet has more substance and runs about 22 minutes, which is a good running time for us.”

The Lady with the Lamp  begins not in Florence Nightingale’s time but in the ’60s when a girl finds her lava lamp transforming into a Turkish lamp like the one Nightingale used. The next section of the ballet portrays her during the Crimean War, and it finishes with a younger Florence and her sister. So, there are actually three dancers portraying Florence.

“The 60s section has music by Buffy St. Marie (Where Have All the Flowers Gone) and Donovan (Universal Soldier),” said Michael, who remembered them as anti-war songs he heard growing up in the Bay Area.

Sarah-Jane grew up in England and feels a connection to her fellow countrywoman. “Florence came from a upper-class family and she simply could have married and lived her life in quiet and comfort,” she said. “Her health was not good following the war, but she continued writing on a variety of subjects and spreading medical knowledge.”

“That’s Mother’s Day weekend,” pointed out Lisa, the mother herself of a ballerina. “Plus, Florence Nightingales birthday is the 12th. Here’s a local opportunity to do something cultural to celebrate mothers, the ultimate healers and comforters.”

Photo by Irene Searles (c) 2018. Pictured (left to right) are two of the Florences, Julie Giordano and Chantelle Planetta, along with Sarah-Jane Measor and Michael Lowe, sporting an Iron Maiden t-shirt because the band wrote a song based on Lord Tennyson’s poem The Charge of Light Brigade, which was about Battle of Balaclavaut during the Crimean War.