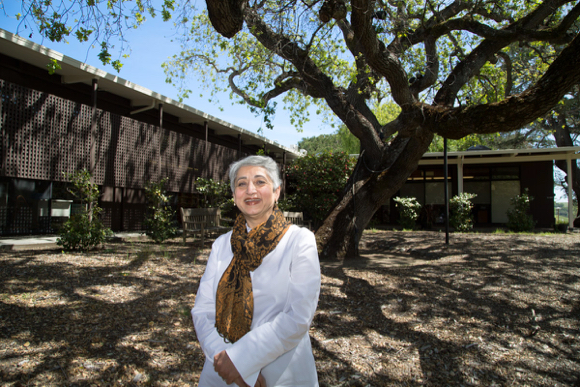 It’s rare when the name of an organization so squarely aligns with its purpose. But such is the case with Presence, which Ladera resident Sonoo Thadaney leads as Executive Director. She co-founded the organization with Dr. Abraham Verghese.

“The business of medicine has taken over the practice of medicine,” she said in partial explanation of the organization’s goal. “We want to re-focus on the physician being present with patients.”

Sonoo’s involvement with Presence, along with the Program in Beside Medicine, which teaches and promotes bedside exam skills to students, residents and healthcare professionals, is a continuation of her lifework of engaging faculty around their scholarship and research, and helping them think about what’s needed to scale their work for the widest impact.

She cites her “magical childhood” in Pune, India, where her parents immigrated in 1947, as an important foundation. “My parents gave me unconditional love that I’ve not seen elsewhere. They gave us space and let us figure out who we were. They let me try things that maybe I shouldn’t have, like riding a motorcycle!”

After being the first in her family to attend college, Sonoo followed a boyfriend, who was embarking on a PhD, to the United States. He’s now her husband of 36 years, and together they raised two daughters in Ladera, which she describes as “a wonderful community similar to Pune, just wonderful people.”

Reflecting on the influences on her life both in the states and India, she says succinctly: “Am I proud of what I do? Would I do it even if no one paid? I can say, yes to both.”