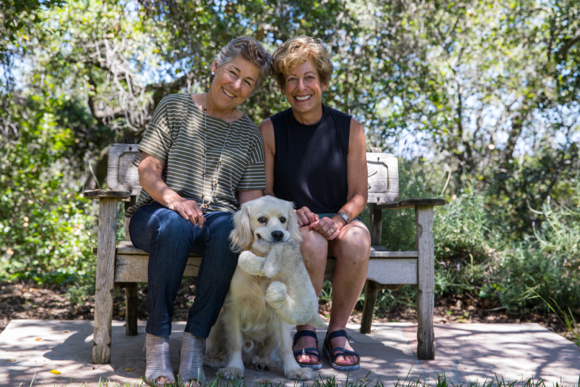 Mosey, a six-month-old mix of Cocker Spaniel, English Retriever and Golden Retriever bounded up the long driveway of Jane Tight’s Woodside home as only a puppy can do. His aim: Greet his other owner, Nancy Serrurier.

Jane and Nancy, friends since raising their respective families in Menlo Oaks, both yearned for a dog since relocating close to each other in Woodside. But neither wanted the full-time responsibility of caring for a dog given their travel and other obligations.

Their solution: dog share. “We first thought about it several years ago,” Jane said.

But a series of events last October put the notion front and center. Both of their children were set to get married two weeks apart in Napa. Nancy’s daughter’s wedding went off without a hitch, but by the time Jane’s son was to get married the wildfires were raging. Nancy quickly volunteered her home as the new venue with just two weeks to prepare. 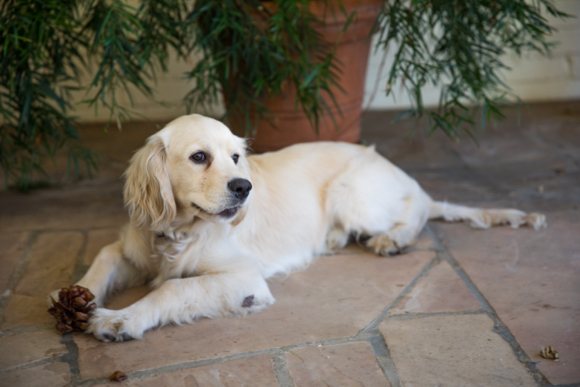 “Between the two weddings, I went to tennis party,” recalled Nancy, “When the hostess opened the door, out bounded this wonderful dog. I quickly found out the name of the breeder.”

“This was going on while I was frantically moving the wedding,” explained Jane. “Then on the day of wedding, between the ceremony and the reception, Nancy comes up to me and says, ‘I found our dog!’. I couldn’t say no – she’d just saved my son’s wedding.”

With the dog on order, the two good friends met for a serious lunch where they discussed the details of the arrangement. And rather than have the puppy shipped to them, they traveled to Thayer, Missouri, to pick him up and bring him back to his two new homes. Mosey spends one week with each of his owners, with flexibility as the schedules dictate.

“The biggest surprise is how much fun and what a joy this has been,” said Jane.

Added Nancy: “We text and call each other a lot with reports of ‘guess-what-he-did today.'”

What a wonderful heartfelt story. Almost did this with a odd Old English Sheepdog/English Cocker Spaniel mix this past January. Won’t pass up on the opportunity next time. What a surprising and wonderful breed mix! Do they routinely produce that mix? Fascinating.

So sad to see them buying a dog when so many are here locally desperate for adoption.