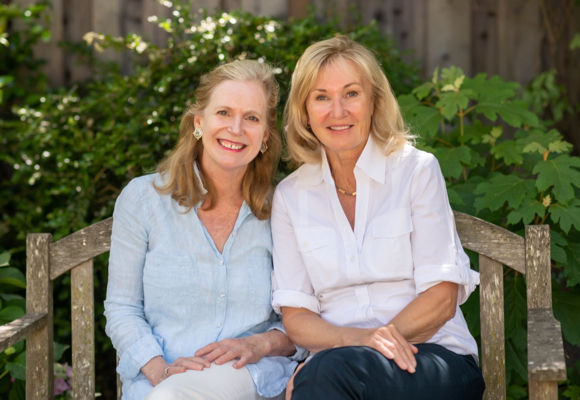 The Windrider Bay Area Film Forum returns to the Menlo-Atherton Performing Arts Center for its 9th year June 28-30 with screenings at 7:00 pm. As in the past, it will be a mixture of feature films, short films and interactive discussion. Tickets are available online.

We visited with two of the Film Forum’s board members, Menlo Park resident Judy Hyne (left) and Atherton resident Wendy Chute, to learn how and why they got involved with Windrider.

In 2010, Judy recalled seeing a notice of the upcoming festival in an issue of BearTracks, the M-A newsletter. “I went the first night and ended up going all three days. During one film, I found out the guy beside me was the filmmaker. It was so intimate and personal. I started volunteering the next year and have been active ever since.”

Wendy also attended the 2010 inaugural season and now hosts filmmakers during the Forum. “In my mind, we are the perfect community to have filmmakers, directors and actors on stage. People ask intelligent questions. It’s real engagement. The people being questioned have worked so hard, and the audience gets that.”

The goal of Windrider Film Forum is to “explore our common humanity imaginatively and compassionately though film” by bringing the best of independent film to the mid-Peninsula. The films are scouted at the Sundance Film Festival and other top festivals in the country. Atherton resident Terri Bullock continues in her role as Windrider’s Director.

Skid Row Marathon kicks off Windrider on Thursday, June 28. It chronicles the story of runners who participate in a running club created by a criminal court judge in LA’s skid row neighborhood. Mark Hayes (filmmaker), Gabi Hayes (producer), Rafael Cabrera (one of the four runners), and Judge Craig Mitchell, creator of the Skid Row Running Club, will attend the screening and join the audience for conversation after the film.

Windrider 2018 concludes on Saturday, June 30 with Inventing Tomorrow, which was an official selection and nominee for the Grand Jury Prize at the 2018 Sundance Film Festival. It follows four ISEF (Intel International Science and Engineering Fair) teams – from India, Mexico, Indonesia, and Hawaii – as they prepare to compete at the largest science fair in the world. Filmmaker Laura Nix and featured students Sahithi Pengali from India, and Jesus Alfonso Martinez Aranda and Jose Manuel Elizade Esperaza from Mexico, will all be in attendance for Q&A following the film.

The Menlo-Atherton Performing Arts Center is located at 555 Middlefield Rd., Atherton. Tickets, on sale in advance or at the door (depending on availability) are $15 general admission and $10 student admission.