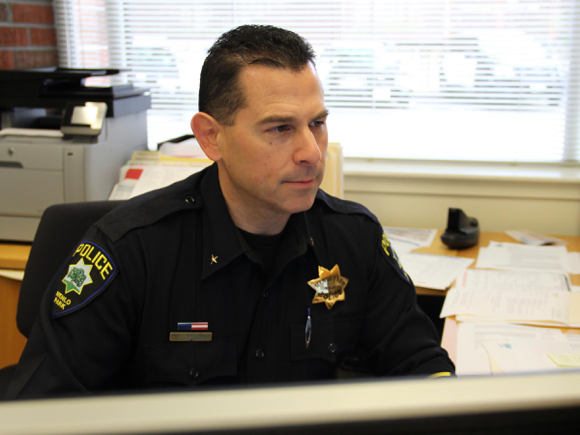 “Since stepping up as interim chief in January, Dave has shown me that he is the right person to serve this community and lead the department,” said City Manager Alex D. McIntyre, who made the announcement today.

Bertini is a 30-year law enforcement veteran, joining Menlo Park in 2011 as a police commander. Before that, he served in the city of Pacifica starting as a police explorer, then as a reserve officer, public safety dispatcher, full time police officer and ultimately as police captain.

“The Menlo Park Police Department is a 21st century organization, and together we will continue to strive toward excellent community service, transparency, crime reduction and prevention, and traffic safety while engaging with the community and other important stakeholders,” said Bertini. “I am grateful for the opportunity to continue to lead this excellent organization, and am proud to be a member of this team,” said Bertini.

During his tenure in Menlo Park, Bertini has served as the patrol commander, administrative commander, and briefly as the City’s interim human resources director. He has helped lead the Police Department through numerous technology and transparency enhancements, including the implementation of officer-worn body cameras and making the department’s policy manual available online.

Bertini has also been a force behind Menlo Park’s efforts to improve emergency preparedness, step up traffic enforcement and add a fourth police beat covering much of the new housing and development areas near the bayfront.

In addition to leading Menlo Park’s police department, Bertini is known throughout the state and nationally for his work training and preparing the next generation of officers. He serves as an adjunct professor in the College of San Mateo’s Administration of Justice Department, teaching classes on the criminal justice system, criminal, constitutional and procedural law and criminal investigations.

He is also a certified instructor for the South Bay Regional Public Safety Training Consortium Police Academy, POST (Police Officer Standard and Training) and the Josephson Institute of Ethics, a national nonprofit organization whose mission is to improve the ethical quality of society by changing personal and organizational decision-making and behavior.

Bertini holds a master’s degree in military history from Norwich University in Vermont, a bachelor’s degree in business management from St. Mary’s College and an associate degree in administration of justice from the College of San Mateo.