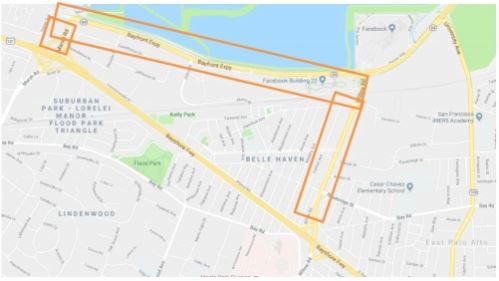 Beginning this fall and continuing for the next 12-18 months, the Optimizing Urban Traffic (OUT) pilot project will be deployed in Menlo Park to optimize traffic flow along Marsh Road, Bayfront Expressway and Willow Road, east of U.S. 101.

The OUT app provides real-time recommendations to drivers on the optimal speed to approach each signalized intersection, minimize the total amount of stops at intersections. The recommendations will result in reduced vehicle congestion and idle time, enhancing air quality and reducing greenhouse gas (GHG) emissions. In addition, data collected from the app pertaining to traffic flows and speeds for analysis can support other projects such as Dumbarton Forward.

Given Facebook’s campus is within close proximity to the project area, there is a great interest in inviting Facebook commuters (single occupancy vehicles , carpools, vanpools and buses) to test the OUT app to improve mobility and safety for all modes of transportation. In addition to Facebook, other potential project participants could include other employers such as Genentech, Google, Apple and Stanford.

The total project cost is estimated to be $417,900, of which $236,700 is from the City/County Association of San Mateo (C/CAG), an in-kind match of $176,200 from Urban Integrated and an in-kind match of $5,000 from Sustainability Silicon Valley (SSV). With SSV as the project lead, minimal staff resources from Caltrans and City of Menlo Park are also anticipated throughout the duration of the pilot project.

Why not also do this for El Camino Real?