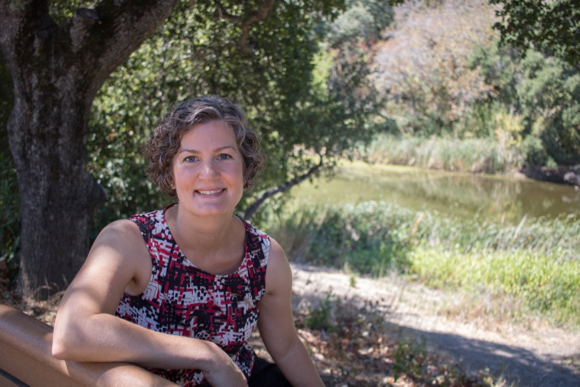 Growing up in the South Bay until the age of 10, Menlo Park resident Hilary Stevenson would frequent Deer Hollow Farm. When she came to Stanford after living out of state, her interest in biology and environmental science, along with wanting to do public service, was firm.

She now has what she describes as her “fantasy job.” She was recently appointed General Counsel of the Midpeninsula Regional Open Space District, a promotion from Assistant General Counsel.

“There is no place like the District if you’re interested in being involved and making decisions that help preserve the environment,” she said during a visit at Windy Hill Open Space Preserve in Portola Valley.

From a biologist perspective the job is fulfilling because “we do a lot of preservation and recovery.”

“We’ve been doing a census of the endangered San Francisco Garter Snake, which exists only here in San Mateo County,” she said. “The numbers are stable. And that means there’s a chance that anyone who’s hiking on one of the District’s beautifully built trails might encounter this endangered species. And just be minutes from home!”

Her work with the Midpen has increased her appreciation of the craftmenship and care that goes into building a trail. “The casual observer might not notice that there’s shade in places, which was done purposefully,” she said. “Trails are built in a ways that are sensitive to the resources and provide a good experience for trail users.”

Asked to pick a favorite District trail, she chose Thornewood, as good for both her 12 year-old twins and the family dog. Another is Mindego Hill trail with it’s great views of the ocean to the west.

While the District preserves can be enjoyed one-on-one, there are also docent-led activities. Upcoming ones include Mount Umunhum: Past and Present at Sierra Azul Preserve on August 4 and an Earthquake Hike at Los Trancos Preserve on August 5.