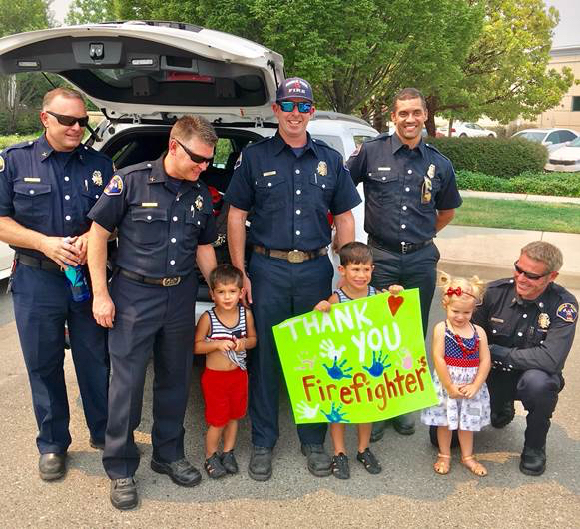 Multiple public safety drones will be flying over the burnt out and damaged areas of the city of Redding and Shasta County starting today and over the weekend.

The Menlo Park Fire Protection District and Alameda County Sheriff’s Department are once again partnering their Drone Programs to assist with aerial damage assessments, mapping and documentation of areas affected by the Carr Fire.

The group last worked together in the city of Santa Rosa and Sonoma County during the 2017 Tubbs Fire, doing similar aerial documentation work.

The Fire District’s UAS/Drone Program was started in 2014, and firefighters have used drones during hazardous material incidents, grass, timber and structure fires, along with missions above the San Francisco Bay, or flooded areas, and in direct support of water rescues or recoveries. Most notably during the South Fork Fire in Yosemite last year, they were flown at night, or in the early morning, to monitor fire behavior and to determine if the fire had jumped containment lines, and to provide real time aerial imagery that was shared directly with fire crews headed into the field for improved situational awareness and to help pinpoint suppression efforts.

The eight member Fire District Team arrived Thursday to prepare for drone operations on Friday. Those preparations included the review, or establishment, of temporary flight restrictions (TFR) for other aircraft and the coordination with the Carr Fires Air Boss, to establish an air anti-confliction plan and to then preview the impacted areas to be flown for familiarity and approach.

Menlo Park Fire Battalion Chief Tom Calvert, who leads the team said: “We’ve learned from our previous experiences above Coffee Park and Fountain Grove last year that we only need to fly between 150 – 200 feet in elevation to capture high resolution photography and video imagery. Using special mapping software, we can then create a zoom-in, zoom-out, 360 degree, stitched together aerial mosaic of the damaged and destroyed areas.”

The eight member Alameda County Sheriff’s team will arrive Friday morning and coordinate with the Menlo Fire team. Both teams will then be assigned to specific areas and grids that will need to be flown, documented but not duplicated over an estimated three day period.

“It’s important to understand that we are once again breaking new ground here, said Menlo Park Fire Chief Harold Schapelhouman.  The use of Public Safety Drones to properly document damaged and destroyed areas is extremely helpful to the homeowners who can then actually find and see their neighborhood and/or property. That also gives them the ability to send that information to their insurance company, or have it be used for reference by the State or Federal Government (FEMA) for claims by residents or the City and County themselves.”