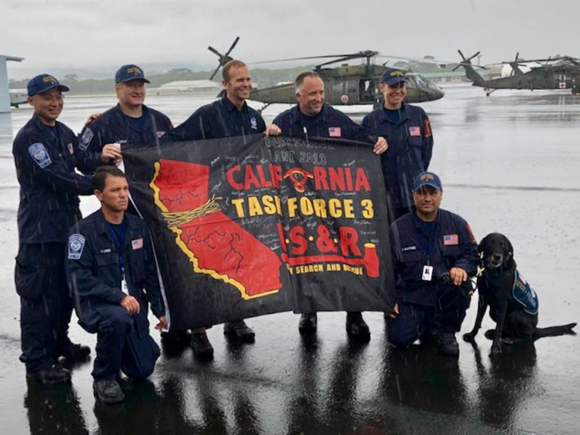 Members of California Urban Search and Rescue Task Force 3, which is sponsored by the Menlo Park Fire Protection District, presented a signed Task Force 3 flag to FEMA Director Brock Long on the Hilo Airbase Tarmac during a rain squall before heading back to the Bay Area.

The 36 members and two search dogs of California Urban Search and Rescue Task Force 3 returned home from Hawaii late Thursday evening. The specialized Search and Rescue Team was first deployed to the Island of Oahu a little over a week ago for Hurricane Lane, then a Category 5 Hurricane.

They worked closely with the Honolulu Fire Department in advance of the hurricane and once the threat to Oahu passed, they were quickly re-deployed to the Big Island of Hawaii where the hurricane broke rainfall records, causing wide-spread flooding, mud slides and rescues, just outside of the City of Hilo.

After arriving in Hilo, the Team assisted the Hawaiian Civil Defense Group with searching 81.2 square miles of remote areas and assessing 1,645 structures which represented 100% coverage of these outlying and more remote areas of the Hawaiian Island like Fern Forest, Mountain View and other areas that required welfare checks and damage assessments that were completed in just three days.