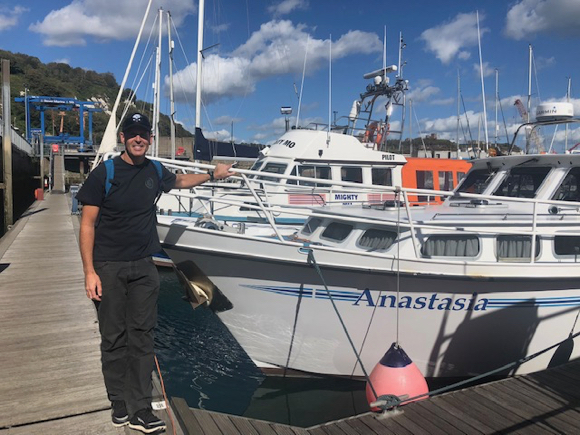 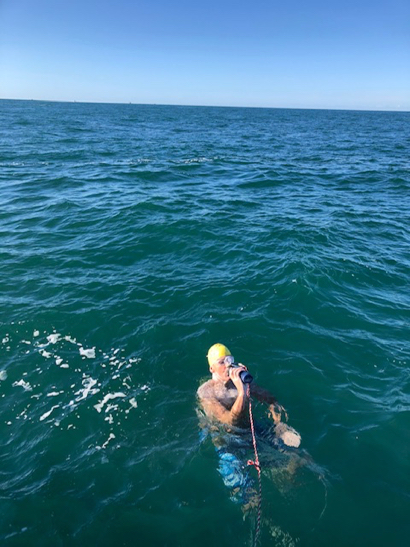 “Based on the tides, you sign up with a boat captain who specializes in Channel swims 20 months in advance. What you can’t control is the wind and the rain, and the wind was blowing 40 to 50 miles an hour while I was there. My window was almost up. Then the captain told me, ‘If you stay one more day, you’ll get your shot.'”

Wearing, as always, just a swim suit, cap and googles, Scott took off from England with the boat captain and his crew of two friends at 11:15 pm. The captain charts the course; the crew provides both motivation and nutrition. “The goal is to keep your energy up, and they’d hand me liquid protein drinks,” he said. “But after awhile nothing tastes good, and I just drank sugar water and coke.

Scott’s primary goal was to finish, and his time of 14 hours, 59 minutes was just a little longer than he’d expected. The currents push the swimmer sidewise in a “a giant s-shaped curve,” according to Scott. 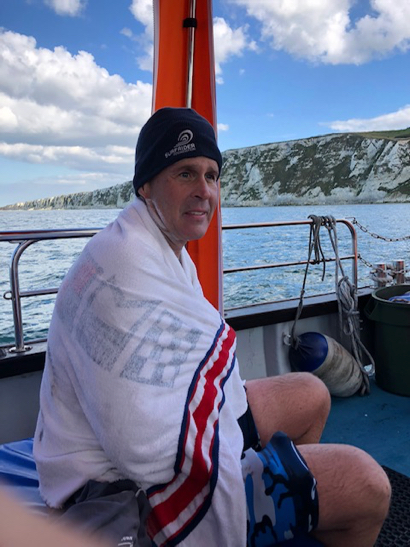 “I felt confident that I was going to make until the last hour,” he said. “The tides kept pushing me, and the land started falling away. Then I saw the cliffs in front of me and picked up the pace.

“I landed on a tiny beach about three miles east of Calais. You have to clear the water and stand on the land to record a finish. I looked around, picked up some sand off the beach and put it in a container I’d brought, and swam back to the boat.

“The crew covered me in blankets, and we took off back to Dover. I drank some water and tea and had a little bit of food.

“Because my window had almost closed, I didn’t get to spend time in London like I planned. Instead, I spent the night in Dover, boarded a flight home from Heathrow the next day, and was back working at the office the following day.”

Scott explained that his preparation for the English Channel swim wasn’t much different from his other swims. He swims at lunch with Menlo Masters at Burgess Pool during the week and with the South End Rowing Club on the weekend. “The Bay and Channel temperatures are similar,” he said.

“This is it, as far as the big ones,” Scott said. “I’ll still swim and do some shorter swims. Next summer I might do the Santa Barbara Channel.”

About swimming the English Channel he said: “It took me 10 or so days after I got home for it to sink in what I had accomplished.”