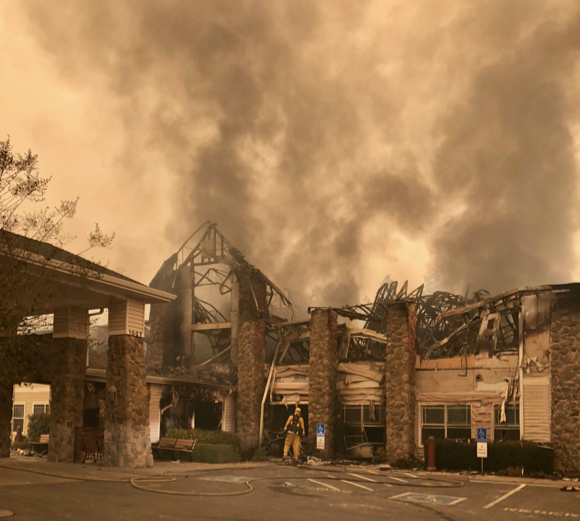 The City may be called Paradise but the reality on the front lines of the firefight is anything but, reports Deputy Chief Don Long with the Menlo Park Fire Protection District who is leading a Northern San Mateo County Strike Team of 20 personnel and five municipal or “heavy” Fire Engines. Participating personnel are from Foster City, Central County (Burlingame, Hillborough and Millbrae), San Mateo, San Bruno and South San Francisco.

Deputy Chief Long, a veteran of many California Wildland Fire deployments, describes the devastation as almost complete. Since leaving the Bay Area mid-day on Thursday, the Fire Strike Team has been on duty in the City Paradise. They were being relieved Saturday morning so they could get fuel, food, and rest and were able to communicate with family and their home Fire Agencies for the first time since their arrival.

“The City suffered major, major damage, and we’ve been busy moving from neighborhood to neighborhood putting out fires since we arrived here Thursday evening,” Deputy Chief Long said. “Everyone has been working non-stop, the conditions are rough, and it will be good to catch a break. But there is still more to be done” .

Added Fire Chief Harold Schapelhouman: “The Fire District is prepared to send out more firefighters and equipment, including our Specialized Drone Team who officially documented the catastrophic damage to both Santa Rosa and Redding after their fire storms. Sadly, we’re getting very good at conducting and providing important aerial imagery and enhanced big picture situational awareness used by first responders, residents, insurance companies and for State and Federal recovery claims on these major disasters.”