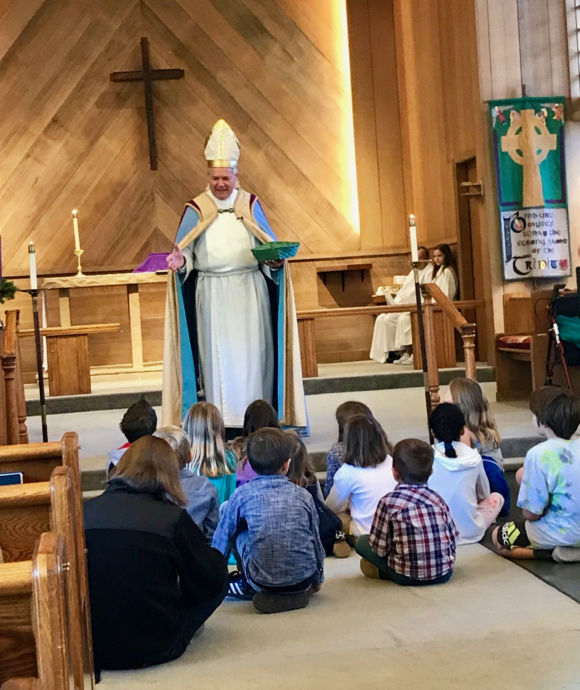 How do you get the attention of young children when there’s a bishop in church? No problem when you’re the Bishop of Myra aka St. Nicholas.

For over 30 years, St. Nicholas – as played by Woodside resident Dick Livermore – has been visiting Trinity Church on the Sunday closest to his feast day (Dec. 6) and telling the assembled children a tale about gold coins appearing in the shoes of poor little girls so that they’d have the dowry needed to marry.

Robert Ellsberg in his book All Saints relates how the Bishop of Myra, who served in a provincial capital of Asia Minor (now Turkey), was transformed into the man we now know as Santa Claus: “The most curious development in the cult of St. Nicholas has been the amalgamation of this fourth-century bishop with the features of a Scandinavian elf. The transfiguration of St. Nicholas into Santa Claus has been traced to Dutch Protestants living in New Amsterdam. As the story made it its way back to England the familiar features of Father Christmas gradually took shape until he had achieved his eventual iconographic status.”

True to legend, St. Nicholas’s visit to Menlo Park today was accompanied by a basket full of gold coins (foil-wrapped chocolates) that were left in the shoes the Trinity kids put outside their Sunday School classrooms.