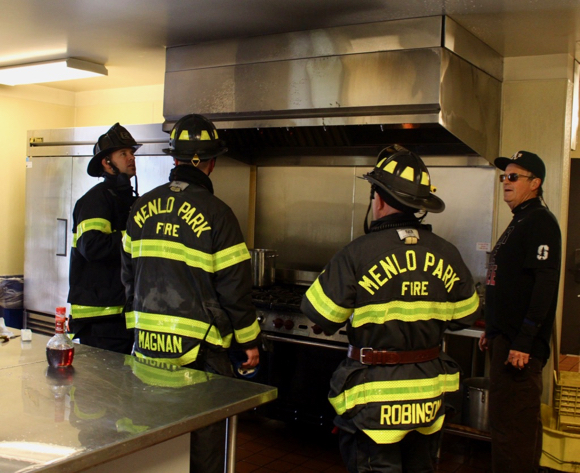 Captain Seth Johnson with the crew on Menlo Fire Engine 6 arrived on scene at 2:24 pm and reported that they had smoke and water inside the gymnasium, but that a kitchen fire had been extinguished by the suppression system.

A fire on the commercial kitchen stove cook top had apparently spread to the overhead filters and was quickly extinguished by the automatic Ansul Fire Suppression system and two adjoining sprinkler heads in the room. Once Firefighters got the sprinkler heads shut down, they quickly addressed the water that had started to spread out of the kitchen and onto the wood gymnasium floor before it could cause further damage.

The cause of the fire is under investigation. Firefighters were unable to determine who had been using the cook top and what exactly had triggered the event. Fire Investigators are inspecting the facility today (Monday) to further look into the incident.

“The suppression systems in the kitchen saved the day,” said Battalion Chief Tom Calvert. “If it wasn’t for them, the fire, heat, smoke and water damage would have severely impacted the entire building.”