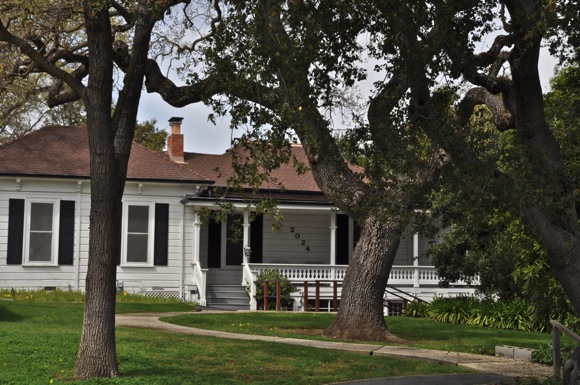 Editor’s note: With the new year, we’ll be looking at some of the historical roots of Menlo Park, Atherton, Woodside and Portola Valley. This post originally ran in 2012.

John Murray and his wife Mary were both Irish immigrants who came to New York City in 1848 or ’49 and met and married there. Mary was pregnant with their first child when the decision was made for Murray to go to California to seek the family’s fortune, while Mary stayed in New York City with friends.

Murray arrived in Menlo Park in 1850 and got a job working on the I.C. Woods estate on Middlefield Road in the Ravenswood area. Murray worked there until about 1856. He then returned to New York to get his wife and young son. When the Murrays came back to California in 1857, they settled at Searsville and bought 38 acres of land. Murray became a dairy farmer.

In about 1873, John Murray made the best business decision of his life. He bought 109 acres on the bank of San Francisquito Creek. The land was rocky and covered with brush and was of no use for cattle grazing. But he could see that it would be an ideal place to put a dam, and he bet the $900 purchase price that someone would pay him far more for the land should a dam be built there.

Sure enough, in 1878 the Spring Valley Water Company bought all of Murray’s land at Searsville for $13,000. Murray rented the property back from the water company and continued his dairy while he looked for a new farm. The dam was completed in 1891.

Sometime after 1878, Murray bought a 70-acre farm in Menlo Park. The property was on both sides of the Alameda de Las Pulgas from Altschul Avenue to Cloud Avenue, and from Valparaiso Avenue to Avy Avenue, plus a 10-acre parcel bounded by the Alameda, Avy and Cloud Avenues and Sharon Road.

However, back then the Alameda was called Mulberry Street, and Sharon Road was called Menlo Avenue and both were paper streets (streets that exist only on a subdivision map).  Altschul, Cloud and Avy had not yet been drawn on a map.

In 1885 Murray built his house and barn on his new farm. The buildings were located in the 10-acre parcel described above.

The house was located near the well. It was a typical farm house for its time and place: a one-story house with a porch around two sides. The front porch faced downtown Menlo Park and the side porch faced Stanford. The house was all redwood. The original configuration of the house is unknown. It either consisted of two bedrooms and a large parlor, or three bedrooms and a small parlor with a kitchen and dining room combination. There was no indoor plumbing. 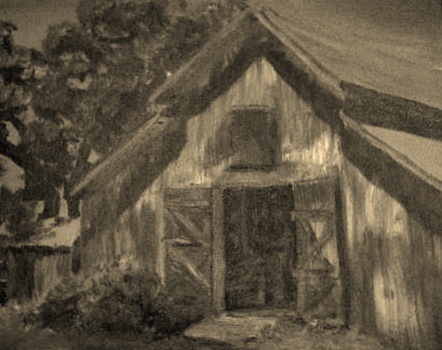 The barn (pictured right) was located about 100 feet from the house where Murray could look down Santa Cruz Avenue and see if he had any visitors coming out from town.

Murray called his dairy at Menlo Park the Stanford Dairy. At the time Murray’s son James worked as the horseshoer on Leland Stanford’s farm shoeing Stanford’s world champion trotting horses. I believe that John Murray and Leland Stanford were acquainted and that Murray had permission to use the Stanford name. Whether it was put in writing or any money changed hands is something I would like to know.

On July 17, 1889, John and Mary Murray sold their farm to Eugene Avy. Avy was a subdivider, and he and others were eager to sell lots to people coming to teach and work at Stanford University, which was scheduled to open in 1891. Avy called his subdivision University Heights.

What I think happened is that John Murray agreed to sell the farm to Avy provided that Avy would allow the dairy to continue to operate on a small part of the farm. Murray then found a new owner for the dairy and retired to downtown Menlo Park.

Avy had to divide the 10-acre parcel that contained the house and barn in a way to give the dairy room to operate. The way Avy did that was to place Lucky Avenue closer to the Alameda than to Cloud Avenue and to expand the 10-acre parcel containing the buildings about 100 feet toward Valparaiso Avenue, thus putting the jog in Avy Avenue.

Avy then received the rental payment from the Stanford Dairy on his land while he worked on selling his lots. He was also free to sell the dairy parcel.  The Stanford Dairy continued to operate on the 4.6 acre parcel created for it by Avy until 1933 or 1934. A dairy was still there in 1935, but I don’t know if it still had the name of Stanford Dairy.

My parents, Tom and Fanny Arnold, used the barn for their horse business, the Idle Hour Stable, from 1935 through 1950. Finally, John Murray’s barn — that caused the jog in Avy Avenue — was torn down in 1951 but the house (pictured top) is still standing.

(P.S. On the tract map for the neighboring Escondite tract, filed on Feb. 26, 1889, Avy Avenue was called Murray Avenue. Although Avy filed his map later, he must have had more pull because the Avy name is what we got.)

Oil painting of John Murray’s barn by “Miss Mooney, a Stanford student, in the late 1940s,” writes Jesse Arnold. “Stanford art classes often came over to paint the barn. I begged one of the students to give me her painting after she got her grade on it, and she said would and she did.”