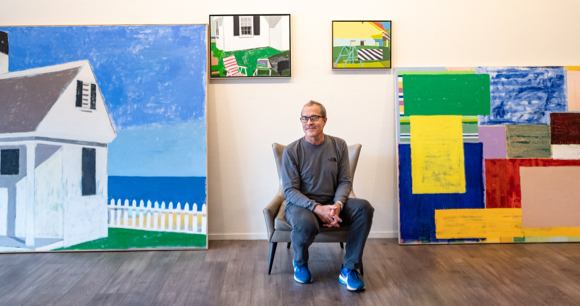 Menlo Park-based artist Mitchell Johnson is having his first gallery show in seven years. Titled Far Away, So Close: Selected Paintings 1988-2018, the collection includes 10 paintings that are headed to museums around the country and newer paintings that are for sale.

“It’s a chance for people to understand how I got to this point,” he explained when we visited yesterday as he was beginning to hang the show.

During the 1990s, Mitchell exhibited his expressionistic landscapes of France, Italy and California at galleries in San Francisco, New York and Los Angeles. His work evolved into larger works with a greater focus on color during the 2000s and his paintings began to appear in national publications such as the New York Times. Today his artworks are in over 700 private collections and 25 museums. 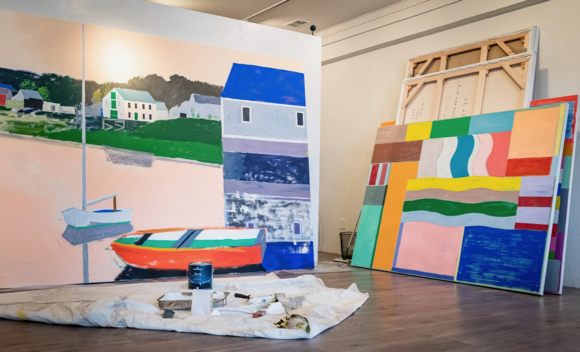 The exhibit is at his friend Marcella’s gallery at 883-1 Santa Cruz Avenue. “She had planned to be away, so the timing was right,” Mitchell said.

The paintings are a mix of representational and abstract work. “The common thread is how things fit into a rectangle,” he said. “Are the color doing something interesting with each other?”

Mitchell spends most of his working time in his studio and rarely gets to interact with the Menlo Park community. During the 14 day run of the show, which opens tomorrow, Jan. 30, and runs through Feb. 12, he’ll be there daily from 11:30 to 5:30 pm.

“I’m looking forward to visiting with people,” he said. “It’s quite different than working solo as I do.”

I always enjoy seeing your paintings included in our copy of the New
York Times. The colors and scenes are so alive and cheerful to look at.
I’m looking forward to seeing your exhibit in Menlo Park this coming
week. Thank you for the pleasure you bring to so many by doing a
lot of hard work!