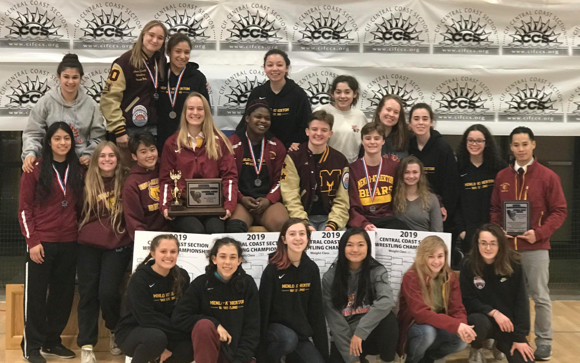 This past weekend, on February 15-16, the Menlo-Atherton High School Girls Wrestling team achieved a level of success that no other M-A sports team has reached in the last 25 years — a third consecutive Central Coast Section (CCS) Championship. 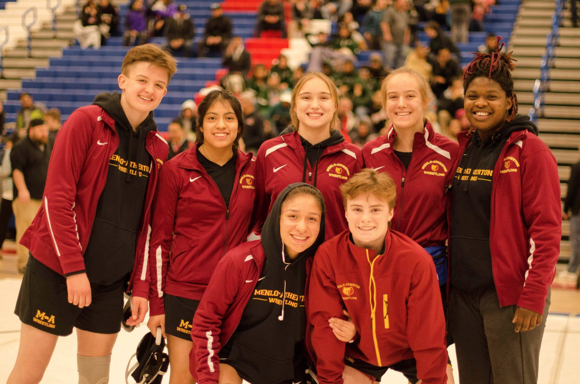 In addition, M-A Girls Wrestling Coach Phil Hoang (picture top photo, far right) won the “CCS Championship Coach Award” for the third year in a row, recognizing his superior achievements in leading the M-A Girls Wrestling Team from a sole girl wrestler four years ago to a championship team of 25 girls ranked in the top five teams in California.

“Four years ago Coach Hoang saw in us the potential to become a state-ranked team. We were inspired by his vision and encouraged by his positive leadership,” said team captain Lauren McDonnell. “As a result, he has built a team with an amazing culture, supportive friendships, and drive for excellence.”

At the State Championship Tournament this weekend, these M-A wrestlers intend to continue to take that positive, winning attitude to their final high school competition together as six of the seven state competitors are graduating seniors.

I was a wrestler at MA a lot of years ago and I know the kind of commitment and talent it takes to become an outstanding wrestler. I want to congratulate all the girls on the team and let them know how proud this old wrestler is of them.