Menlo Park resident Oscar Salvatierra Jr., MD, professor emeritus of surgery and of pediatrics at the Stanford University School of Medicine and a leader in the effort to enact national legislation regulating organ donation, died March 16 at his home in Menlo Park. He was 83. The cause was complications of Parkinson’s disease.

A funeral mass will be held at 10:00 am on Thursday, March 21 at St. Raymond Catholic Church, 1100 Santa Cruz Ave., Menlo Park, followed by a burial at Holy Cross Cemetery (corner of Avy and Santa Cruz Avenue). There will be a reception from 11:30 am to 2:30 pm at the Left Bank restaurant, 635 Santa Cruz Ave.

A pediatric kidney transplant surgeon, Salvatierra was the physician most involved in the development and passage of the National Organ Transplant Act of 1984, the legislation that established a nationwide network to enable the fair and equitable allocation of donor organs to patients across the country. The law, on which Salvatierra collaborated with then-Congressman Al Gore, also banned buying and selling donor organs. It has served as a model for laws regulating organ transplantation around the world. [Dr. Salvatierra and Vice President Gore reconnected at Kepler’s Literary Foundation event in 2017; top photo.]

“It saddens me to hear of the passing of my friend and former colleague Dr. Oscar Salvatierra,” said Gore. “Oscar’s tireless dedication to the development of the National Organ Transplant Act helped revolutionize the medical field and human rights in the United States.”

In addition to his work on the transplant act, which Salvatierra completed while serving as president of the American Society of Transplant Surgeons, he was a beloved clinician and prominent scientist whose research profoundly improved pediatric kidney transplantation. 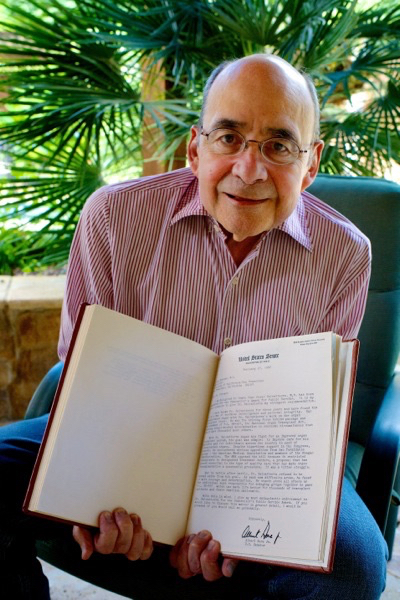 “Dr. Salvatierra dedicated his career to making organ transplants safer, more successful, and more widely and fairly accessible,” said Lloyd Minor, MD, dean of the Stanford School of Medicine. “His work in transplantation helped restore health to thousands of people around the globe, including the many children he cared for in the world-class kidney transplant program he founded at Lucile Packard Children’s Hospital Stanford.”

Salvatierra developed methods that enabled small children to be successfully transplanted with adult-sized kidneys, making it possible for many children to receive kidneys donated by adult donors, including their relatives. He also pioneered an immune-suppression protocol for pediatric kidney transplant recipients that avoided steroid medications, which have harmful side effects in children, such as severe growth suppression.

Advocate for better and safer transplants

Salvatierra served in the U.S. Army Medical Corps in Vietnam and worked as a physician in Pomona, California, before beginning a postdoctoral fellowship in transplant surgery at the University of California-San Francisco in 1972. The first successful kidney transplant had been performed in 1954, and by 1972, the year that Medicare coverage was expanded to include renal dialysis and kidney transplantation, the value of these transplants was widely recognized.

Salvatierra was chief of the UCSF transplant service from 1974 to 1991, when he moved to Pacific Presbyterian Medical Center, now known as California Pacific Medical Center. He was part of a group of surgeons and staff who came from the center to Lucile Packard Children’s Hospital Stanford to establish the hospital’s pediatric liver and kidney transplantation programs in 1994.

“He was a gifted clinician and one of the best doctors I have ever known,” said Steven Alexander, MD, professor of pediatrics and division chief of pediatric nephrology at Packard Children’s. “He was much loved by his patients and their families, and the kidney transplant program he founded at Packard Children’s Hospital has grown to be one of the largest and most successful in the world.”

At Stanford, Salvatierra pushed for better and safer kidney transplants. He conducted magnetic resonance imaging studies of blood flow in small children who had received kidneys from adults, determining that about 20 percent of such transplants were failing because the child’s smaller blood volumes left the transplanted organs vulnerable to blood clots. A new fluid-management protocol Salvatierra developed raised the success of such transplants to nearly 100 percent.

Salvatierra also questioned the need for corticosteroid medications for immune suppression. The drugs had been considered essential to prevent rejection of kidney transplants, but had serious side effects in children, causing growth suppression, high blood pressure, acne, vision problems and weight gain. In the early 2000s, Salvatierra conducted clinical trials of an immune-suppressing antibody called daclizumab, demonstrating that the steroid-free regimen not only prevented rejection but also did less damage to the transplanted kidneys than steroids.

Mentor and role model to physicians

A compassionate mentor and physician Salvatierra helped many other physicians develop their careers, often serving as a mentor and role model. “When I was just beginning my surgical training, I happened to see his name listed from UCSF as their kidney transplant surgeon,” said Carlos Esquivel, MD, PhD, professor of pediatrics and of surgery and chief of the division of abdominal transplantation at Stanford.

It was the early 1980s, a time when few surgeons came from minority backgrounds. “I thought, ‘Here is somebody with a Spanish last name, and he is at a prestigious university and already has an excellent reputation. This is who I’m going to emulate.’ “He was truly dedicated to his patients — very compassionate, with a great bedside manner,” added Esquivel, who led the team that moved with Salvatierra from Pacific Presbyterian to Stanford. “And he was a very deliberate and skillful surgeon.”

Children who need kidney transplants are quite ill, and Salvatierra became known for his ability to connect with young patients and help calm their parents’ fears. During their years of collaboration, Esquivel learned that one of his own sons needed surgery for a kidney problem. “I chose Oscar to do his surgery,” Esquivel said, adding that the decision felt especially weighty because of his own professional knowledge. “For a surgeon, to pick someone to do an operation on your own child means you think that surgeon is the best person in the world. And I did.”

Salvatierra retired from his clinical responsibilities in 2006, becoming associate dean for medical students at the School of Medicine, a position he held until 2015. He received many major awards during his career, including knighthood by the Republic of Italy, the presidential medal from the president of Argentina, a special commendation resolution by the California State Legislature, the UCSF Chancellor’s Award for Public Service, a special recognition award by the UCSF Chancellor, Stanford’s Rambar-Mark Award for Excellence in Patient Care and Stanford’s Franklin Ebaugh Award for Outstanding Medical Student Advising. In 2019, the International Pediatric Transplant Association recognized him with a lifetime achievement award.