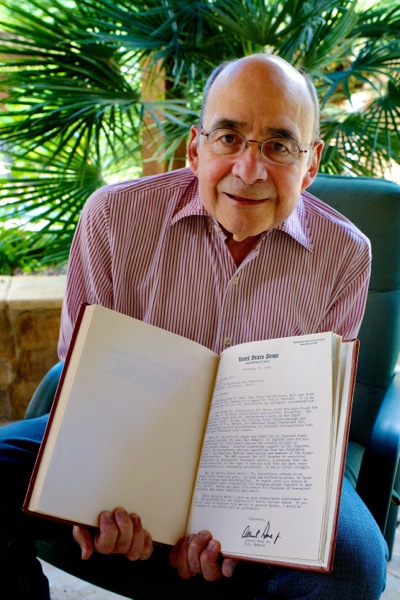 Dr. Oscar Salvatierra’s accomplishments and awards in the area of transplant and pediatric surgery are extensive, but from his perspective, they revolve around two simple statements. “I want to improve the human health condition, and I want to be a good neighbor to my fellow man,” says the Menlo Park resident.

“To me, my life has been about people. Yes, it’s been medicine, but it’s about people. I think that’s very powerful because that implies respect, sensitivity and compassion for your fellow human beings.”

When Oscar atttended medical school at the University of Southern California, he recalls that he was the only Latino, that there were only three women and no African Americans. “The worth of human life was impressed upon me not just in med school but taking care of the casualties of the Watts riots [in 1965] and also later when I was in Vietnam.

“I held many soldiers in my arms as they were leaving this life. They’d cry out, ‘Hold me. I feel so alone. I don’t what to die.’ Here were these young men with their dreams and futures completely snuffed out.

“It was there that I received the inspiration for the rest of my life. I committed myself  to help young people realize their hopes. That has been a part and parcel of everything I’ve done since then.”

An emeritus professor and surgeon who no longer operates, Oscar focuses on mentoring med students, who he views as “smarter and motivated for the right reasons” compared to when he was in school. “They are passionate about helping the disadvantaged and working in under-resourced countries,” he says.

Given a career of many distinguished accomplishments, we asked (unfairly) if he could single out one thing he was most proud of. He cited the National Organ Transplant Act, which he worked on with former Vice President Al Gore. The Act was passed in 1984, and he showed his visitors a book of the letters, memos and other documents his assistant put together for him, a chronicle of the uphill battle he fought and won.

“We had to fight the AMA and the Reagan Administration,” he says. “There wasn’t the understanding and acceptance that there is today about organ donation and transplant surgery. At the time, it was primarily kidney transplants. Heart and lungs were experimental.

“We didn’t have the votes and ended up meeting with 60% of the Senate to make it happen. It was tough. But it happened.

“It proved why it’s important to never give up.”

A very beautiful human being.