Free Balinese music concert at Menlo Park Library on May 4 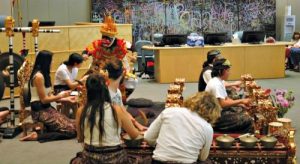 Come to the Menlo Park Library on Saturday, May 4 from 11:00 am to noon for a free concert of traditional Balinese music, performed by Gamelan Anak Swarasanti of Santa Cruz.

Balinese gamelan is native to the island of Bali, Indonesia. A gamelan orchestra is often considered to be a single instrument played by many people, divided into smaller components for ease of playing. Each gamelan is made as a unique set, with its own characteristic tuning.

Free wheelchair accessible van service is available for Menlo Park area seniors and people with disabilities. Call 650-330-2512 by Thursday, May 2 for van reservations.