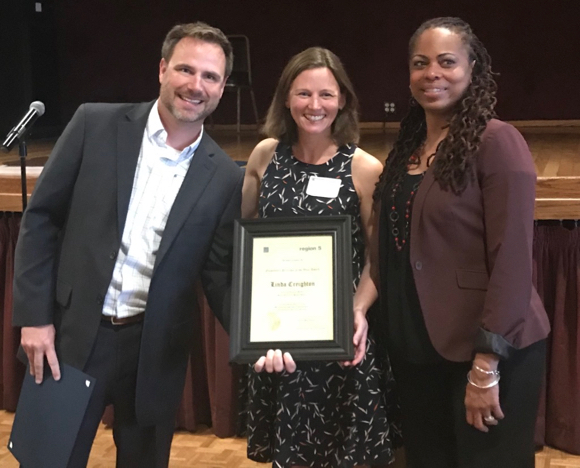 In his introduction of Linda, MPCSD Superintendent Erik Burmeister (left) remarked: “Laurel is at the forefront of educational innovation because of Linda’s leadership. Today, Laurel is the largest and most diverse school in the district serving preschool through fifth grade over two campuses that are 1.5 miles apart.

“With a commitment to educational quality and student achievement, Linda led her community through a two-year visioning process to redesign the purpose and programs of Laurel school.

“Laurel now serves as a model for schools around the state for its inquiry based approach to learning, commitment to fostering global competencies complimented by its outstanding Spanish Immersion program, and its remarkably positive and learner-centered culture.”

Linda joined MPCSD in 2001 as an elementary teacher, became Laurel’s Vice Principal in 2005, and Principal in 2008. When she started her principal career, Laurel was a K-3 campus of 540 students on one campus, which grew under Ms. Creighton’s leadership to a K-5 school of 710 students across two campuses.