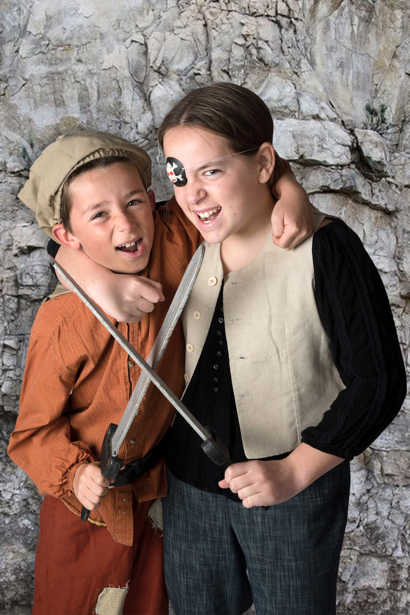 Two local siblings will team up as fun-loving pirates in the upcoming Peninsula Youth Theatre (PYT) production of Gilbert & Sullivan’s  musical classic, The Pirates of Penzance, playing at the Mountain View Center for the Performing Arts this May. The Menlo Park-based sister-and-brother duo, Isabel (12) and Ben (9) Zohar, will take the stage together starting May 11th as members of the Sullivan cast.

“I really like performing and being in front of an audience, and my role in Pirates allows me to make dramatic character choices—funny or stern. It’s a super fun and energetic show, and I’m so happy to be in the cast,” said Isabel. “Participating in PYT shows has been a great experience, and it has given me a lot of confidence. I’ve met some amazing new friends outside of school and it’s so fun to bond with them during rehearsals as well as backstage during ‘tech week’ as we’re preparing for performances.”

The Zohar siblings have been involved in musical theatre since they were seven years old. When not performing or going to school, Isabel enjoys diving and participating in a local choir group, while Ben loves playing basketball, football, and baseball. They have participated in other PYT MainStage productions this past year (most recently Isabel performed in Shrek the Musical, and Ben in Roald Dahl’s Willy Wonka). Pirates of Penzance is the first PYT production in which the siblings will be singing, dancing, and acting on stage together.

“It’s fun performing in a show with my sister because we play similar roles in the same cast. We rehearse together, and if one of us is falling behind for some reason, we can help each other out,” said Ben. “Performing in shows and seeing people from the audience afterward is really fun for me. I love meeting new friends at PYT and playing a funny pirate on stage has been a great experience so far — especially since I love pirates.”

Pirates of Penzance is a comedy operetta in which misunderstandings abound. It tells the story of young Frederic, an orphan who is mistakenly apprenticed to a boisterous band of pirates until his 21st birthday. When he is finally free to pursue his own adventures, he disavows the pirates’ way of life, and instantly falls in love with Major-General Stanley’s beautiful daughter, Mabel. However, will his pirate comrades let him leave so easily?

“Pirates is a rollicking good time, and to me, the really exciting thing about the way we’re doing it is that there is truly something for every viewer to enjoy,” said Gary Gerber, the show’s director. “Fans of children’s theater will, of course, be pleased to see a stage full of enthusiastic and talented teens and youngsters. But just as important, diehard fans of Gilbert & Sullivan operas will be equally pleased because we’re seriously building this show to be every bit as beautiful, lyrical, funny and delightful as they’d expect from any high-quality community theater.”

The Pirates of Penzance opens on Saturday, May 11, 2019 at 2:00 p.m. with the Gilbert Cast, and Saturday, May 11, 2019 at 7:30 p.m. with the Sullivan Cast (which features Isabel and Ben). The show runs through Sunday, May 19, 2019; the complete schedule is available online. All performances will take place at The Mountain View Center for the Performing Arts at 500 Castro St, Mountain View, CA.

Content is appropriate for children of all ages. Ticket prices are $24 for adults, $20 for seniors (62+), $20 for students 18 and under, and $12 for children 5 and under. Please note that the City of Mountain View adds a $2 per ticket facility use fee to all orders. The city assesses additional fees depending on method of purchase. Tickets are available online or through the box office at (650) 903-6000.