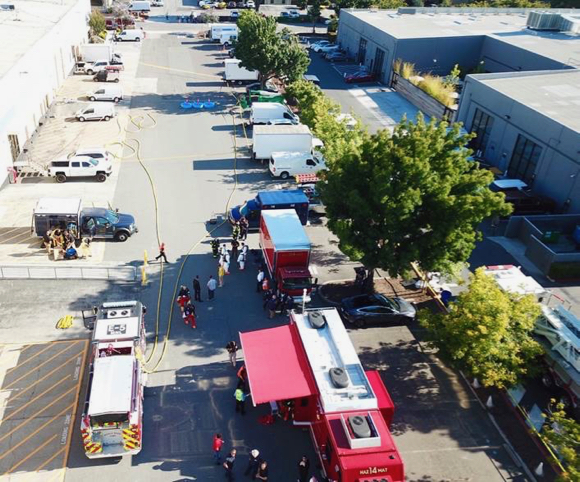 A package suspected of containing the hazardous material GB Sarin was removed from a Facebook mail and delivery building on Hamilton Court in Menlo Park early this morning.

“At approximately 11:00 am PDT on July 1, 2019, mail delivered to one of our mail rooms in Menlo Park was deemed suspicious,” said Facebook spokesperson Anthony Harrison in a written statement. “As part of Facebook’s routine mail security screening process, we identified a potentially dangerous substance. 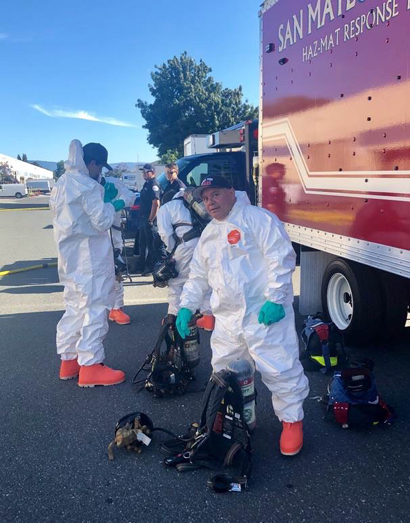 “Out of an abundance of caution, we evacuated four nearby buildings and began a thorough investigation in coordination with local authorities. Authorities have confirmed test results were negative for any potentially dangerous substance and the buildings have been cleared for repopulation. Our rigorous security and safety procedures worked as intended to limit exposure and keep our people safe.”

“This event was contained to the structure of origin and did not present a threat to the broader community,” said Menlo Fire Chief Harold Schapelhouman. “The Fire crews and other agencies on-scene took a very methodical and careful approach to how this event was handled. Operations were ultimately terminated with the removal of the suspected item in question around 1:00 am Tuesday, 14 hours after this incident started.”

The San Mateo County Public Safety Communications Center (PSC) received a report that a suspicious package had arrived at Facebook’s mail and package facility Monday morning. The caller reported that “the package was suspected to contain a chemical agent inside, two people may have been exposed, and the suspected agent could be GB Sarin.”

When Menlo Fire Captain Roy Trester and the crew of Engine 5 arrived on scene, it was quickly determined that there had been no human exposure. Given that there was no medical component, Captain Trester requested a full Hazardous Materials Response and made sure the dozen or so employees in the building were evacuated.

The county’s Hazardous Materials Response Unit arrived on-scene at 11:26 am followed shortly by the county OES and Environmental Health. Menlo Fire Battalion Chief Tom Calvert, who was the incident commander, met with all parties once they arrived on-scene to establish a course of action.

After assessing all of the circumstances, the United States Postal Service and Federal Bureau of Investigations (FBI) were requested because the suspected package had been mailed via the US Postal System. Both of those groups arrived on-scene between 2:00 and 3:00 pm.

Once on-scene, the larger group discussed each agency’s capabilities, needs and role. It was determined that the California National Guard’s Civil Support Team (CST) out of Hayward, whose specialty is in dealing with chemical, biological and radiological incidents, should be requested to respond and were. They arrived on-scene around 5:00 pm. 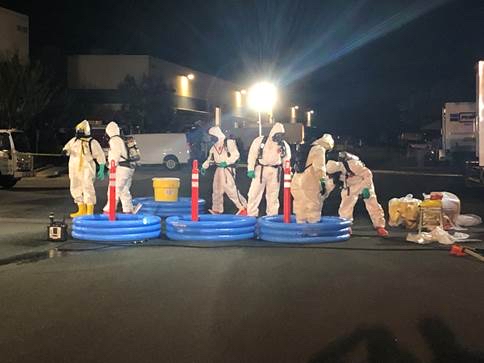 The combined San Mateo County Hazardous Materials team and Cal-Guard CST team jointly entered the structure at 6:00 pm clearing each room until surveying and testing the package in question. They exited the structure 45 minutes later and were decontaminated.

The second entry of the building occurred after 10.30 pm Monday, using more sophisticated detection equipment, and the package was subsequently removed.

Posting on Facebook, Menlo Park Mayor Ray Mueller wrote: “Thank you to the FBI Joint Terrorism Task Force for your great work today in Menlo Park, and for the briefing this evening. Additionally want to express appreciation for the US Postal Service Inspectors, San Mateo County Hazmat Team, Menlo Park Fire Protection District, Menlo Park Police Department and Facebook Security Team for their work all day and late into this evening. Finally a big thank you to Menlo Park Fire District Director Rob Silano who invited and chaperoned me onsite, sharing his expertise from his long service in the FBI and DHS. Ultimately more sophisticated testing cleared the area, but the coordination of response was impressive. The public was well served.”

Third photo: Firefighters and others conduct a briefing prior to re-entering the Facebook Mail and Package facility for a second time – Menlo Fire

Fourth photo: Menlo Park Firefighters decontaminate themselves and then breakdown the decontamination area after the primary entry and back up teams were decontaminated for a second time – Menlo Fire