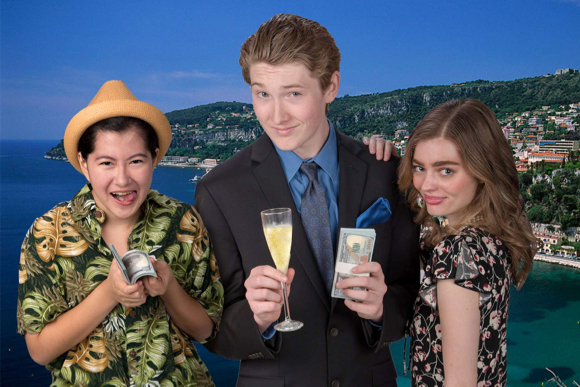 Based on the popular 1988 MGM film, Dirty Rotten Scoundrels follows the hijinks of two very different con men, Freddy Benson (played by Ria Cuellar-Koh), and Lawrence Jamison, who are each out to bilk heiresses on the French Riviera and then become bitter rivals for the biggest catch of them all. Whichever one of them secures $50,000 from “American Soap Queen” Christine Colgate will win their bet – but will a mysterious con man known as “The Jackal” ruin the game?

“The character that Ria is playing in Dirty Rotten Scoundrels usually is played by a male, but her comedic timing, quick wit, and versatility made her a perfect candidate for this role,” said Meg Fischer Venuti, the show’s director and choreographer at PYT. “Ria works really hard on her physicality, so she is able to convey whatever character you give her. There aren’t many lead female characters in this musical, so this was an opportunity to leverage Ria’s skillset to the fullest.”

Ria has been participating in PYT for the last four years, starting when she was in the fifth grade. Ria was cast in her first PYT CenterStage musical last year, which was PYT’s production of Peter and the Starcatcher.

“This production is very different than most of the musicals and plays I’ve been part of in the past, and it has been a thrill to explore a different genre, and with it, learn new skills,” said Ria. “Dirty Rotten Scoundrels is a fun romp that can be enjoyed by a wide variety of audiences.”

Dirty Rotten Scoundrels opens Thursday, July 18, 2019 at 7:30 p.m. The show runs through Sunday, July 21, 2019. All performances will take place at The Mountain View Center for the Performing Arts SecondStage at 500 Castro St, Mountain View, CA. Content is appropriate for teens and up.

Ticket prices are $24 for adults, $20 for seniors (62+), $20 for students 18 and under. Please note that the City of Mountain View adds a $2 per ticket facility use fee to all orders. The city assesses additional fees depending on method of purchase. Tickets are available online or through the box office at (650) 903-6000.