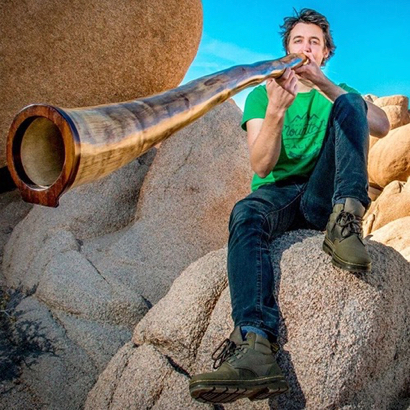 Musician William Thoren of Didgeridoo Down Under will take you on a musical journey to Australia and beyond, as he plays an assortment of didgeridoos and percussion instruments. You’ll be hearing a modern style, mixing fast-paced rhythms with relaxing soundscapes and organic sound effects.

William Thoren has been making and playing didgeridoos for more than a decade, and is one of the most popular didge crafters, performers, and instructors in the U.S. He has performed at festivals, schools and other venues throughout the states and Europe, and he has spent time in Australia learning about the didgeridoo / yidaki from Aboriginal elders. He is the owner of WET Didgeridoo, and is a founding member of the didge hip hop duo Gorangutang. Will also is a professional photographer, based in Los Angeles.

This free event has received funding support from the Friends of the Menlo Park Library.