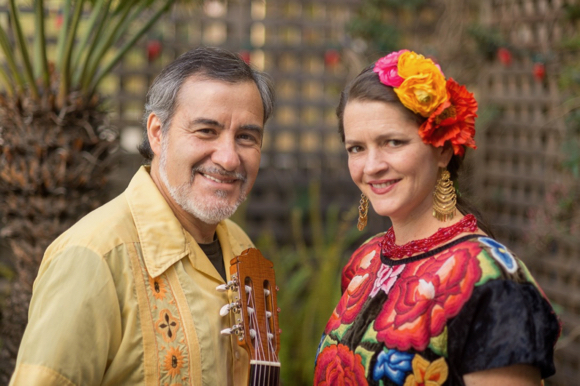 Enjoy the Dúo Cascada de Flores as they dig deep into the hidden corners of the Latin American songbook and add their own creativity in form of composition and poetry. Of course, there will be sing-a-longs at this event scheduled for Saturday, July 27, at the Belle Haven branch (413 Ivy Dr.) of the Menlo Park Library

For 18 years, Jorge Liceaga and Arwen Lawrence, the co-founders of Bay Area music ensemble Cascada de Flores, have celebrated and reinvented musical traditions from Mexico and Latin America. The duet brings together bolero to bambucos, rancheras to trova, with a dizzying number of traditional instruments. Cascada de Flores has recorded four albums, created theatrical concerts such as Radio Flor and The Tree & the Donkey, collaborated in projects with local masters of Latin cultures, and scored music for film, shadow-theater, and modern dance.

This free event is supported by funding from the Friends of the Menlo Park Library.