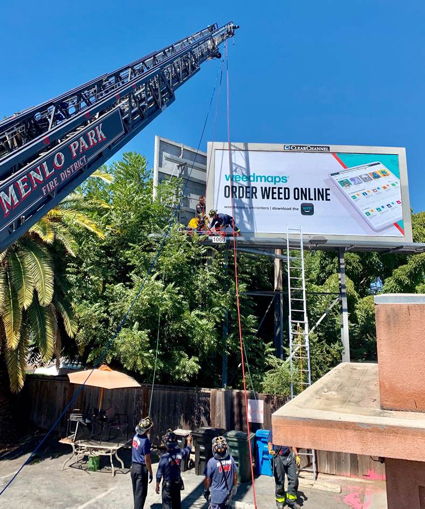 Yesterday Menlo Fire Truck 2 responded to a ladder request from the East Palo Alto Police Department to assist a man who was on an elevated freeway billboard sign along Highway 101. The man, in his 30’s, said he was throwing things from the catwalk to “get someone’s attention” but now wanted to come down as he was feeling weak and dizzy.

Truck 2 was positioned as a make-shift “crane” in order to use the 108-foot aerial ladder to lift the man from the catwalk. The truck operator carefully moved the aerial ladder over an empty parking stall so it could be swung into the best position for the man to be lowered and placed on an ambulance gurney for transport to the hospital.

“We occasionally have used our aerial ladders as make shift ‘cranes’ to remove people and animals from trees, creek beds, culverts, bridges, roof tops or open basements under construction, usually under similar unique circumstances,” said Fire Chief Harold Schapelhouman. “I guess we can now  can add billboards to that list. Someone suggested that the wording on the billboard may have been what made him climb up there – who knows. The Truck crews regularly practice their rope and ladder skills, so this was just another day at the office for most of these guys. I’m glad it turned out well and was done in just under an hour before the commute traffic started on Highway 101.”