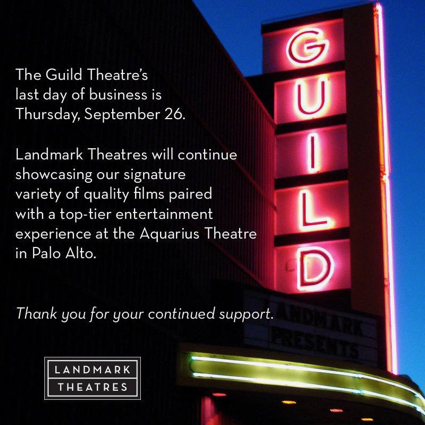 The notice says it all. The last picture show in Menlo Park – aka the Guild Theatre – is closing on Sept. 26.

One of area’s oldest entertainment venues, the Guild opened in 1926 and was called the Menlo Theatre. ImagineMenlo has a good history.

We’ll try to catch up with the Peninsula Arts Guild to get a status report on their proposal to renovate the cinema facility into a live entertainment venue.

I have confirmation from Drew Dunlevie, president of the Peninsula Arts Guild that the theater is closing, as you’re noted on the date stated in the Facebook post on the Guild’s Landmark page (after the Thur. Sept. 26 showing). I expect news from Drew about the status of a “Goodbye Guild” event we had been planning with an intended showing at the event – a screening of the film “Cinema Paradiso”, but Landmark owns the projector at the theater, so that needs to be negotiated. I hope to be at the theater this Thursday to make an announcement of the “Save the Guild Theater” which morphed into the “Movies at the New Guild” campaign after the purchase of the theater by the PAG. An article may be pending in the SF Chronicle by former local resident Sam Whiting about the closure – he did wonderful articles about my efforts to keep the theater open and find a new buyer who would do a fulltime movie schedule. At the time that the PAG purchased the building, Drew made assurances that the new Guild would show movies, but not on a schedule to conflict with their main project, live entertainment, but that the movies would be part of the public benefit requirement of the City, and that “theater quality” simple padded seats and “risers” to create the theater slope, and a state of the art projector to the stage area was part of the new Guild’s setup. Bad news on the closure. Good news that the future use of the Guild sometime in the near future. But the current building needs to be demolished, saving the “signature” marquee.