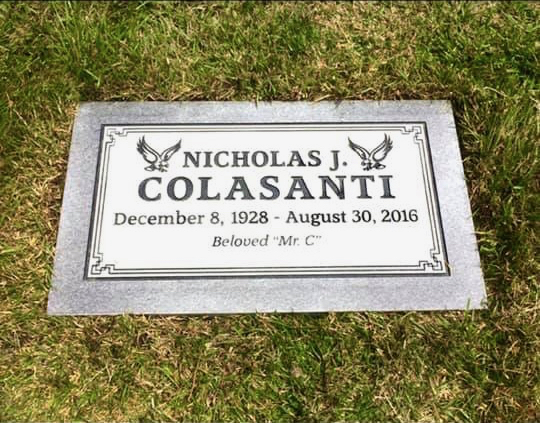 Lots of Hillview School grads, including this one, took notice when Erik Colasanti posted a photo of his father Nick’s new tombstone on the Facebook group Do You Remember the Old Menlo Park, which featured two hawks, the school’s mascot.

Mr. Colasanti, who died in 2016, grew up and was educated in New Jersey but took his first teaching job at Hillview before taking a break from Hillview to go to Germany and teach for a military base in Aschaffenburg. He returned to Hillview, where he would spend the next 36 years, serving the school wearing many hats — teacher, counselor, coach, and Vice Principal. During this time he was very instrumental in developing learning programs and testing techniques with the Slingerland Group for Dyslexia, according to his obituary.

Emails Erik: “I don’t know the actual origin story of the mascot. The Hillview hawk has always been part of my life. My dad was teaching at Hillview before I was born. I probably spent more time at Hillview than any other kid who didn’t attend Hillview. I wore Hillview Hawks t shirts and sweatshirts, went to Hillview dances, went on the Hillview ski trips, outdoor education, etc.

“My dad loved Hillview so much. It seemed like he was there much more than he was home. The Hillview faculty was like our extended family. I called Walt Key my Uncle Walt, and Leon Johnson my Uncle Leon. I’ve never seen such a closely knit group of co-workers anywhere else in my life.

“They did everything together, and the glue that held this ‘family’ together was a shared love of Hillview School, and a commitment to provide the best possible education for the students who attended Hillview.”